When Home is Where the Harm is: Family Law Reform to Challenge Gender-Based Violence

In collaboration with the New School and in conjunction with CSW60

Founder and President, Women’s Learning Partnership, and former Secretary General of the Women’s Organization of Iran and Minister of Women’s Affairs in Iran (Iran/USA)

Founder and Executive Director of Cepia, and former President of the National Council for Women’s Rights (Brazil)

Senior Advisor on Global Strategy, Ford Foundation, and former President and CEO of the Global Fund for Women (India)

Director of Bir Duino Kyrgyzstan, and Founder and Director of the International Documentary Human Rights Film Festival One World (Kyrgyzstan)

Former Senator in the Parliament of Jordan, and former Secretary General of the Jordanian National Commission for Women (Jordan)

On March 17, 2016, Women’s Learning Partnership (WLP) will launch the first global campaign on family law reform to eliminate discriminatory laws against women in the family and challenge gender-based violence. The three-year research and advocacy campaign focuses on the relationship between articles of law and perpetration of violence against women and girls, and marks the launch of a new initiative supported by the International Development Resource Centre (IDRC), Ottawa, Canada. Leaders, government officials, and activists will convene for a panel discussion in conjunction with the 60th Session of the UN Commission on the Status of Women (CSW).

The conference is a powerful engine for merging civil society and government policy-making for collective advocacy against gender-based violence. Topics of discussion will include necessary changes to legal systems, and root causes of social and cultural beliefs and practices that make reform and implementation of progressive laws challenging.

Co-sponsored by Gender and Sexuality Studies at The New School for Social Research and Ethics, Power and Justice at the Schools of Public Engagement

Watch When Home Is Where the Harm Is (video, part 1)

Watch When Home Is Where the Harm Is (video, part 2)

View When Home is Where the Harm Is event photos 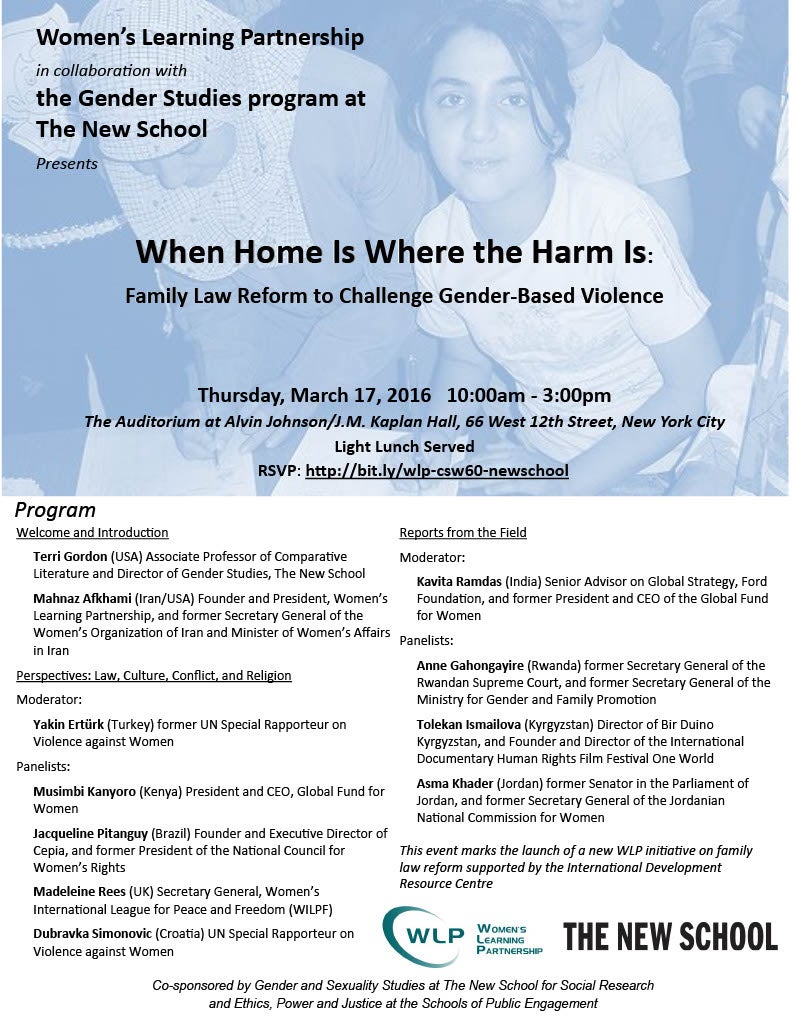 Leading up to May 15th, International Day of Families 2019, WLP will hold a Partnership-wide digital awareness campaign including to raise awareness about the need for #GenderEqualityinFamily. Our partners, allies, and followers will be able to engage with our campaign by sharing info-graphic facts about inequality in the family and attending a webinar hosted by WLP staff and partners.

Equality Starts in the Family: Research and Advocacy for Change