A Poetry and Prose Reading

Iranian prize-winning short story writer and novelist. Before emigrating to France in 1980, she taught philosophy at Tehran University.

Professor of Sociology at Mohammed V University in Rabat, Morocco

This event, held in collaboration with The Center for Global Peace at American University, will feature readings by leading women authors of the global women's movement. Reader-Authors include: Elizabeth Alexander, Merle Collins, Fatema Mernissi, and Goli Taraghi.

Literature can weave lifelines connecting the listener to testimonies that inspire and call for solidarity. Women’s voices resonate across divides to convey understanding and appreciation for the pain of exile, torture, violence and war, and the possibility of starting fresh, of healing, safety, and peace.

Elizabeth Alexander teaches English and African American Studies at Yale University and in the summers at Cave Canem Poetry Workshop, devoted to supporting and nurturing the work of African-American poets. She was the Grace Hazard Conkling Writer in Residence at Smith College from 1997–1999, and the first director of Smith’s Poetry Center. Her works include The Venus Hottentot, Body of Life, and Antebellum Dream Book.

Goli Taraghi is an Iranian prize-winning short story writer and novelist. Before emigrating to France in 1980, she taught philosophy at Tehran University. Among her publications are I Too Am Che Guevara, Winter Sleep, and The Great Lady of My Soul. She has also written scripts for two major Iranian films, Pear Tree and Bita. Her forthcoming work is a novel entitled The Strange Behavior of Mr.A.in Exile.

Merle Collins, Grenadian writer, is professor in the Comparative Literature Program and the English Department at the University of Maryland. She has worked with women's organizations in Grenada and previously taught in the Caribbean Studies Program at the University of North London, England. Her writing reflects an interest in society and politics. Her publications include Angel, Rotten Pomerack, and The Color of Forgetting.

Fatema Mernissi, Professor of Sociology at Mohammed V University in Rabat, Morocco, is a prolific writer who has reinterpreted Islamic texts from a feminist perspective and supervised publication of a series of books on the legal status of women in Morocco, Algeria, and Tunisia. She is the author of Scheherazade Goes West: Different Cultures, Different Harems, Beyond the Veil: Male-Female Dynamics in Modern Muslim Society, Dreams of Trespass; and other works.

For me, this is One Thousand and One Nights. This panel of writers, containing an American, a Grenadian, and an Iranian, contains a wonderful diversity of languages, countries, colors, and types of literature (poetry, non-fiction). The Arabic word for travel is safar (root of safari); it is through this that we put our masks down by confronting diversity.
Fatema Mernissi 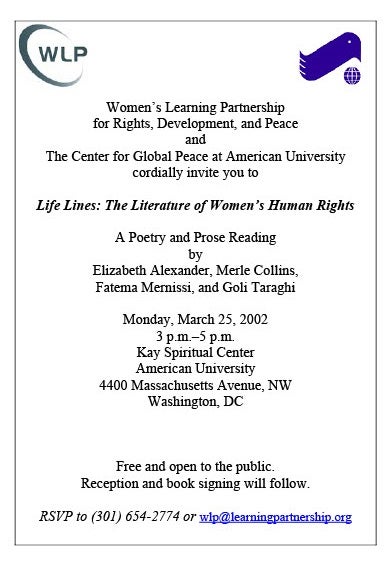 Lifelines: The Poetry of Human Rights at CSW62

This event will feature readings by leading women poets during the 62nd Session of the UN Commission on the Status of Women in New York City, 2018. Abena Busia, Jamila Reddy, Fatemeh Shams, and Michelle Yasmine Valladares present.

Lifelines: The Poetry of Human Rights at CSW61

This event will feature readings by leading women poets during the 61st Session of the UN Commission on the Status of Women (CSW) in New York City, 2017. Karima Bennoune will give opening remarks, followed by poetry presentations of Abena Busia, Tsitsi Jaji, and Ladan Osman.