A Decade of Working for Change

Since 2007, WLP’s partner in Morocco,L'Association Démocratique des Femmes du Maroc (ADFM), has worked closely on collective land issues with Soulaliyates, rural women in Morocco. Over a decade ago, one woman’s courage to stand up to discriminatory land policies in her village led to a partnership between the Soulaliyate women and ADFM that has mobilized hundreds of other women to take action and claim their rights.

This collaboration has resulted in many important achievements for women’s rights in Morocco. In 2017, ADFM helped organize a three-week advocacy campaign in which over 600 Soulaliyate women and allies traveled from Fez to Daraa-Tafilalt to the Rabat-Sale regions. The caravan of women brought the issue of women’s land rights to the attention of policymakers in Morocco. During this three-month long campaign, ADFM held 16 communications and advocacy workshops that targeted 660 women from 30 different ethnic groups. These workshops helped equip Soulaliyate women to become participatory leaders and advocates for their rights. (Read more about this historic initiative here.)

In July of 2018, the Soulaliyate women achieved a major legal and social victory when the women of Kenitra province were given equal land rights to the men in their communities. Specifically, in the Ben Mansour tribe, women were given financial compensation for previously transferred lands, and in the Ouled Mbarek tribe, women were given plots of land alongside men. This marked a major victory of the Soulaliyate women’s recognition as equal and legitimate land holders by both women and men in their communities. 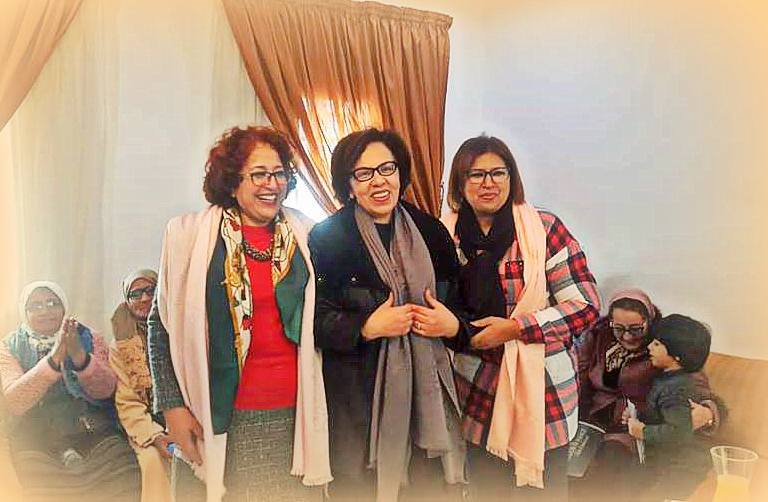 From left to right: Saida Drissi, Rabia Naciri, and Khadija Oueldammou smile for a picture while celebrating with the Soulalyiates

A Celebration of Collaboration

In December 2018, the women of the Kenitra province in the region of Lgharb surprised three ADFM members with gifts and a celebration to honor the decade-long partnership between the Soulaliyates and ADFM. Rabia Naciri, Khadija Oueldammou, and Saida Drissi received portraits to recognize the support that ADFM has given Soulaliyate women and to honor their dedication to gender equality in Morocco.

Drissi is currently the President of ADFM and National Coordinator of the Anaruz National Network of Listening Centers, which provides important services to victims of gender-based violence. Naciri is a founding member of ADFM and played a key role in initiating the review of inheritance laws in the Maghreb. Oueldammou is one of ADFM’s senior workshop facilitators and part of WLP’s global facilitation team. Since 2007, she has served as coordinator of ADFM’s campaign for the rights of women in collective lands, and has designed and implemented training and capacity-building modules specially adapted for the Soulaliyate women involved in this campaign. These three life-long advocates along with many others at ADFM have been instrumental in empowering women, like the Soulaliyates, to ensure gender equality in Morocco. 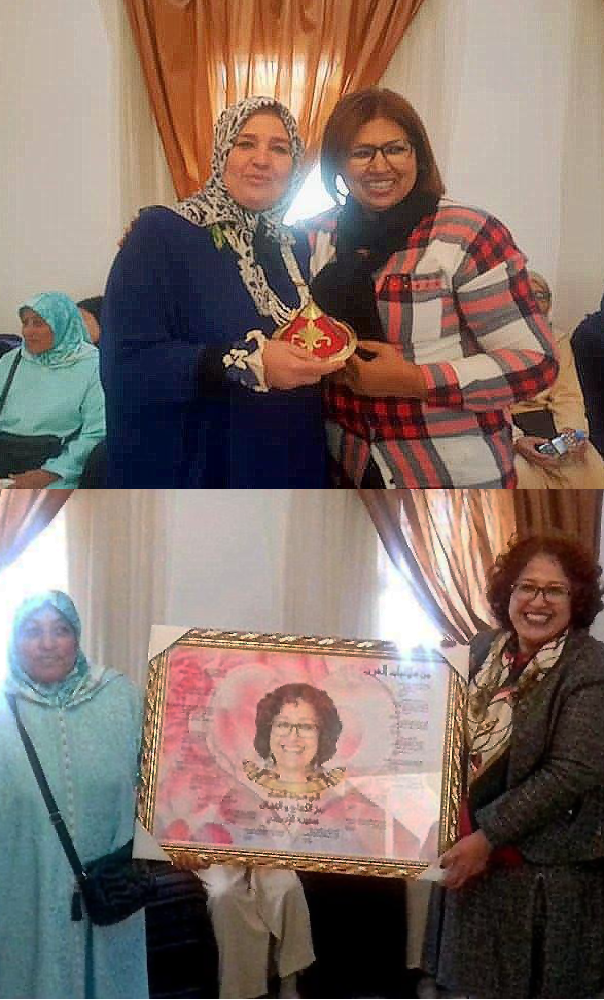 Notably, the celebration took place in the province of Kenitra, the same region in which the Soulaliyate movement began over a decade ago. The movement is now one of the strongest grassroots advocacy movements in Morocco, reaching and equipping thousands of women all over the country. At a workshop coordinated by ADFM, one Soulaliyate participant shared that “with all of the communication tools and advice that ADFM provided us, from now on, I will be capable of speaking in front of decision makers…knowing that my battle is legitimate will give me the strength to face any challenge or opponent.”

ADFM and the Soulaliyates have achieved major strides in ensuring equal land rights for Moroccan women, and as more women join their movement they look to the future of their work. In 2018, Morocco’s king, Mohammed VI, announced major agricultural and land reforms, and the Ministry of Interior established new methods for identifying land rights holders. ADFM plans to mobilize their network of Soulaliyate women to make sure that women are informed of these new reforms and equipped to guarantee their rights. Additional workshops are planned to reach more Soulaliyate women and build solidarity between women from different regions and tribes.

A growing network of empowered Soulaliyate women is an encouraging sign for the future of gender equality in Morocco.  Khadija Oueldammou of ADFM believes that despite the obstacles and difficulties still encountered by women on collective land, the situation of the Soulaliyates today is very satisfactory and the results of their advocacy are sustainable. “Empowerment efforts have led to the awareness of Soulaliyates all over Morocco that they are entitled to collective lands on the same footing as men,” said Oueldammou. “They now have the skills and the tools to organize themselves to demand this right.”