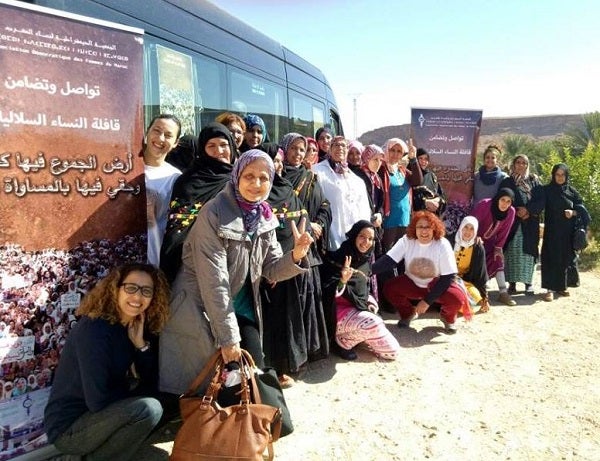 The dawn of the Soulaliyate land rights movement

Rural women of Morocco, known as Soulaliyates, are demanding rights to land ownership through political participation. The movement started in 2007 when Rkia Bellout, a Soulaliyate from the Kénitra region, was excluded from the sale of her ancestral land while the men in her family profited. Bellout decided to take action, and sought the counsel of Moroccan women’s organizations to help her claim her right to participate in decisions over land ownership. When she brought her complaint to WLP’s partner in Morocco, l’Association Démocratique des Femmes du Maroc (ADFM), they organized a national grassroots movement of Soulaliyates calling for equality in land ownership.

Ethnic tribes controlled communal lands in Morocco until 1912 when the country became a French Protectorate. In 1919, France issued a decree that transferred control of communal lands to the state. While men and women farmers still cultivated the land, and harvested its fruits, the tribes no longer owned it.

When Morocco gained independence from France in 1956, the state retained control of communal lands, and instituted committees of rural men called nuwabs to represent their communities’ interests in the lands. However, Soulaliyates are excluded from these committees, and Moroccan inheritance law forbids single women, widows, divorcées, and women without sons from inheriting rights to their ancestral land, despite women making up half of the agricultural labor force in Morocco. 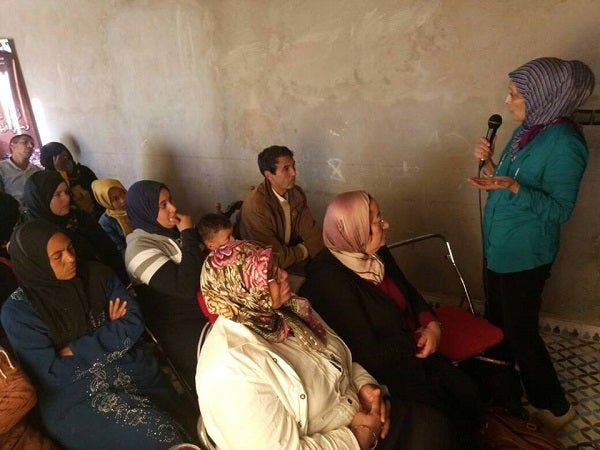 Women and men gather for a workshop on Soulaliyate rights to communal lands.

While the value of communal land has traditionally been in its agricultural productivity, recent economic liberalization policies—the World Bank’s privatization policies in the 1990s and Morocco’s 2004 Free Trade Agreement with the United States—have incentivized the state to sell communal lands to real estate developers. Nuwabs have been the principal brokers of land transactions and have hence benefited handsomely from them. Meanwhile, the ancestral land of countless Soulaliyate women like Rkia Bellout has been appropriated without compensation.

State institutions are not the only obstacles to Soulaliyate land rights. Soulaliyates face stigmatization from family and community members if they compete with men for land. Rutgers University Professor Gender Studies Zakia Salime wrote in a 2016 essay that, “Because of their precarious economic position, women cannot afford to lose the imagined support of a brother, upset a husband, or compete with a son over land rights. Many fear or have been subjected to retaliation, sometimes in violent ways.”

ADFM intensifies the Soulaliyate movement for rights to communal lands

ADFM is leading the Soulaliyate grassroots movement for land ownership reform. ADFM’s advocacy has put pressure on the Ministry of the Interior to pass a specific law guaranteeing equality between men and women in communal land ownership and transactions. The Ministry has reacted to the pressure, but not nearly as decisively as ADFM is demanding. It has issued a series of non-binding ministerial guidelines called “circulars” that merely pay lip-service to the Soulaliyate movement. The latest one, Circular 17, recognizes Soulaliyates’ right to land ownership in theory, but not in practice. After Circular 17 was issued in 2012, ADFM held a press conference called, “Soulaliyates: Circular 17…Pending a Specific Law that Guarantees Equality between Men and Women in the Collective Lands.” 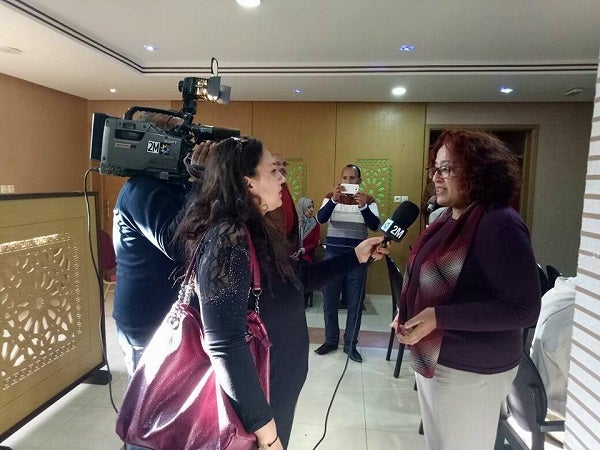 ADFM marked the 10-year anniversary of the Soulaliyate movement with its greatest push awareness-raising and capacity building on land rights yet. From October 24 to December 15 2017, ADFM set out on the “Caravan of Soulaliyates.” The three-week advocacy caravan mobilized 660 women who travelled to three regions: Fez, Daraa-Tafilalt, and Rabat-Salé. The caravan met with policymakers, raised the voices of Soulaliyate women, and held workshops on women’s participatory leadership in numerous cities throughout those regions.

ADFM held 10 leadership workshops during the caravan, and an average of 50 women attended each one. WLP’s participatory leadership handbook, “Leading to Choices,” has been the cornerstone of ADFM’s capacity building work with the Soulaliyate communities since the movement’s inception in 2007. ADFM has adapted the handbook to meet the needs of Soulaliyate women by using scenarios drawn from their own experiences. WLP and ADFM’s leadership methodology empowers Soulaliyates to participate effectively in decision making processes in their tribes.

Three to four Soulaliyate movement-leaders from different regions shared their advocacy experiences at each stage of the caravan. The dialogue between Soulaliyates from remote corners of the country fostered camaraderie. Even though 465 kilometers and the Atlas Mountains separate the coastal city of Kenitra and the Algerian border-town of Errachildia, women from these two areas discovered that they have shared experiences and are working towards a common goal. The caravan’s mobility strengthened the bonds of solidarity among Soulaliyates across the country.

ADFM President Saïda Drissi Amrani emphasized those bonds. “We have met women who, even if they do not know how to read or write, are very aware of the principle of equality,” Amrani told HuffPost Maroc. “They denounce contempt and they are ready to fight. We will support them until the end,” she continued.

With the support of ADFM and other civil society organizations, the Soulaliyates will continue their fight until a constitutional law is passed guaranteeing equality between men and women in communal land ownership and transactions.

WLP begins the coming decade of partnership and change with the announcement of our new board chair Dr. Musimbi Kanyoro.