The international news agency Le Journal Afrique recently interviewed Aminetou Mint Moctar, Executive Director of WLP Mauritania/l’Association de Femmes Chefs de Famille (AFCF), about her anti-slavery activism.  AFCF, which is based in Nouakchott, Mauritania, has been a WLP partner organization since 2004. Executive Director Mint Moctar has been a voice for social justice and ending slavery in Mauritania for decades.  In the interview, Mint Moctar provided her reaction to the U.S. government’s recent decision to end trade benefits with Mauritania, citing the country’s insufficient progress in ending forced labor and hereditary slavery.  The video in its original French is available online here with the interview beginning at 10:31. The following are highlights from the interview transcribed in English and edited for clarity: 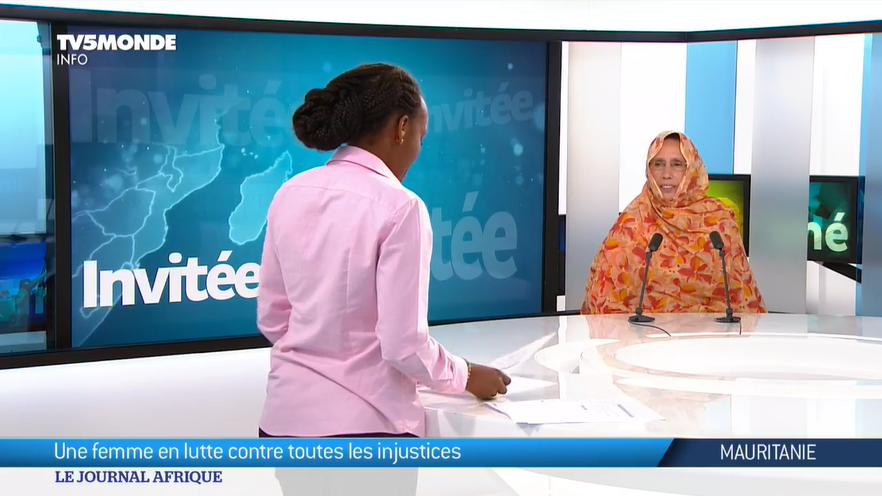 Le Journal Afrique (LJA): Four days ago, the President of the United States decided to sanction her country, Mauritania, because of the persistence of slavery. Our guest tonight has been fighting against these practices for a long time. A woman, Moor, and defender of the Harratines - the descendants of black slaves - she also fights against racism, religious fundamentalism, and for women's rights. Aminetou Mint Moctar, good evening and welcome to Le Journal Afrique. Thank you for being with us. So Donald Trump will impose economic sanctions on your country, Mauritania, because of slavery, starting on January 1, 2019. Is this a good decision in your opinion?

Mint Moctar: Yes, I think it's a good decision. Since slavery is a crime against humanity, everyone knows it, but unfortunately this phenomenon exists in Mauritania. This should also be an opportunity for all European countries to [sanction Mauritania] – France, Germany and Spain, all European countries. No country can develop, especially my country Mauritania, while more than 50% are enslaved by descent. When we speak of slavery in Mauritania, it is a contemporary form of slavery by descent that is passed down through the mother.

LJA: There has been a lot of progress in recent years, a law to make [slavery] a crime against humanity, to also toughen the punishments against those who are the perpetrators of slavery or forced labor. Do you find that Mauritania is doing enough or not?

Mint Moctar: Precisely, there was this law making slavery a crime against humanity. There have been courts set up, but unfortunately it turns out that these are achievements made for foreign consumption and have no effect on the situation of slavery.

LJA: That is to say?

Mint Moctar: That is to say…there are doubts that this law exists in effect. There have been three trials that have ended without results, without anything. Today the question of slavery becomes very catastrophic for countries. The victims of slavery, also--they are in situations of precariousness and negligence that are extremely serious. Their complaints and the files that remain in the drawers of justice have never been examined. This is in addition to the consequences of slavery, which are very deep and which really reveal the lack of political will to apply the law and above all else, to eradicate the aftermath of slavery. 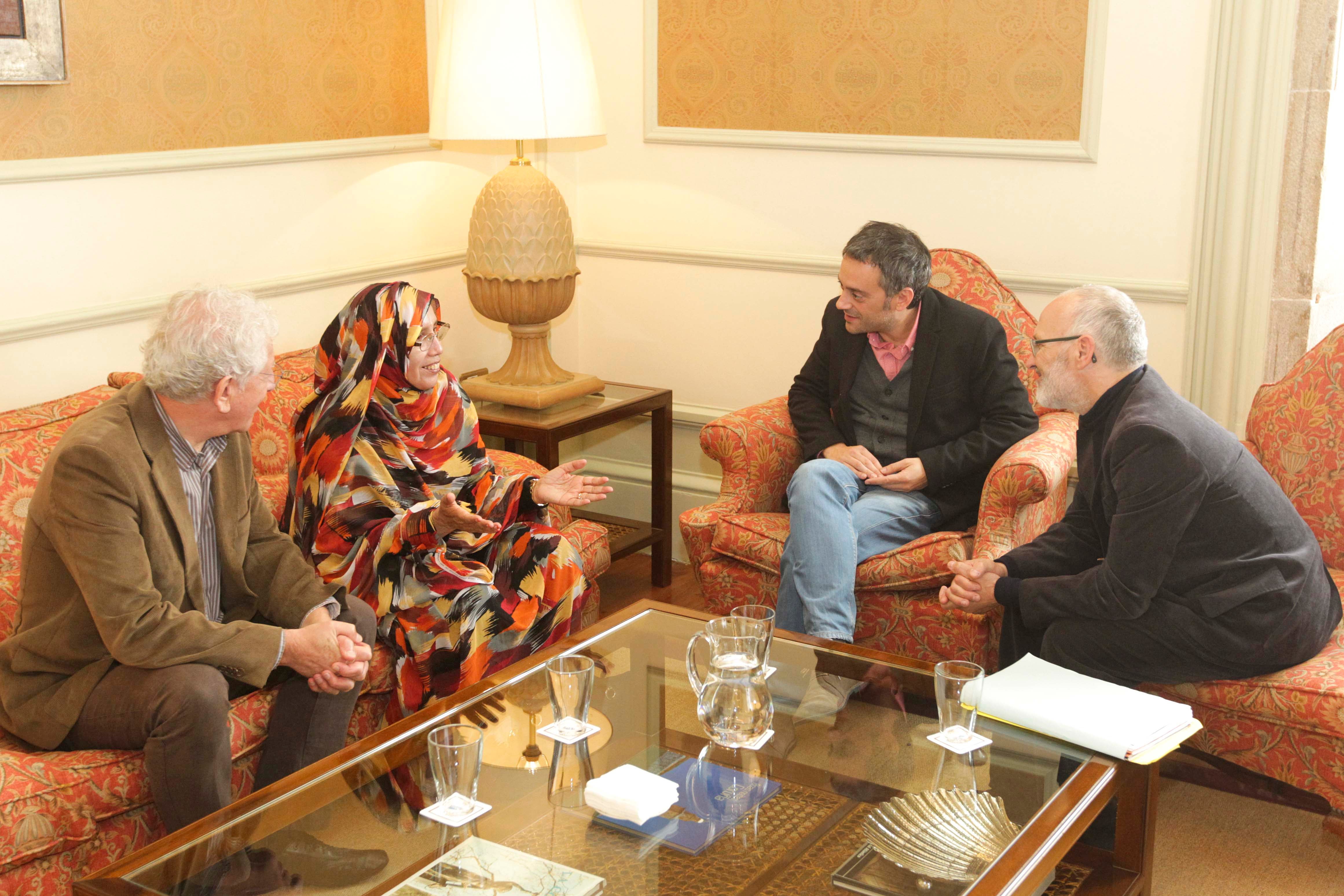 Mint Moctar: In regards to the arrest of IRA President Biram Dah Abeid, it is a political arrest that has nothing to do with anything else. The regime of Mohamed Ould Abdel Aziz has accustomed us to this. This is not his first arrest, Biram is wanted because he is an anti-slavery leader who did a lot of work on slavery. It is also very serious and political because he is a candidate; he has been elected as a member of Parliament today with unanimity. He should get out of prison. We immediately demand his release because, the fact is that his arrests have no legitimacy in the face of his mandate as a deputy.

LJA: Mrs. Moctar, to return to your path, you are a woman. You are from the Moorish nobility. You started this fight against slavery in Mauritania very early on. All that pushes you today still to fight against inequalities in the caste of which you are a part and even that you have benefited from...

Mint Moctar: Exactly, I have never adhered to these castes that oppress and more importantly to the feudal system that marginalizes. That's been my opinion since I was very young, I was very rebellious against all of these practices.

LJA: So this is the trigger. What was the first time you said to yourself, “It's not fair, I can fight against that?”

Mint Moctar: When I was very young, I was ten or eleven years old, I was attracted to the national left movements in my country. It's from there that triggered the attack on slavery because I feel that slavery is a crime against humanity and as a crime against humanity, it must be denounced by all.  As a woman, as a marginalized person, as all women in Africa are, especially in my country because of the customs, the traditions, the false interpretation of religion, as religion is also interpreted to maintain people in a situation of slavery.

LJA: Your parents and you yourself had slaves, I presume.

Mint Moctar: They had slaves but they were released because I'm not interested in keeping human beings enslaved to the most inhuman and degrading practice.

LJA: Do you remember how this was at your house? The slaves were treated in a way that made you react even as a child.

Mint Moctar: Exactly, what I did was try to work to change their minds, create a foundation, because I was young I could not force them, but they ended up getting free because even they did not have to be slaves anymore, they freed themselves. For my part, there were still a lot of problems with the family. But still, the essential thing is that they left, they gave up their situation of servitude.

LJA: So another fight is the fight against religious fundamentalism. You also supported the blogger Mohamed Ould Mkheitir who was sentenced to death for apostasy. You come from a society that is predominantly Muslim, but today you are afraid of political Islam.

Mint Moctar: I actually supported Ould Mkheitir because I think he was the victim of a machination of the traditional religious apparatus, but also of the religious extremists. He is also, we must not forget, from a caste that has always been marginalized in my country. And that is why there are other people…who have done more serious crimes than him who were never worried. He is from a marginalized caste, so he was arrested for only repeating what was written by an Egyptian. So I supported him and I continue to support him. I ask that he be released.

LJA: The last question - you went through several political regimes in Mauritania, where, it seems to me, it is increasingly more difficult to be a woman, to be free, and possibly to be an atheist.

Mint Moctar: I think that Mauritania is no longer the Mauritania in which I grew up. We had no constraint from the point of view of freedom. Today we are confined to a fanatical Islam where women are reduced to slavery just like contemporary slavery.

LJA: Aminetou Mint Moctar, thank you for coming on our set and sharing all the information on Mauritania and on Mauritanian society. Thank you.