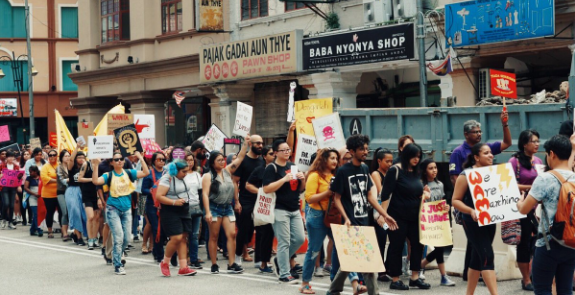 The display of solidarity was interrupted by three men who attacked a group of demonstrators from Women’s Aid Organization (WAO), a close ally of AWAM. In a video of the incident that one of the perpetrators filmed and posted on Facebook, three men on foot chased down a group of six WAO protesters who were walking home from the Women’s March.  The perpetrators hurled homophobic and transphobic insults, like “We are against LGBT” and “LGBT is not allowed in Malaysia” while in pursuit of them.

The men then stole the protesters’ signs, one of which read, “Why I march? So girls will never have to say #MeToo.” It was unclear why the perpetrators targeted the marchers with homophobic insults since their signs indicated they were protesting rape culture and sexual violence.

The perpetrators, who claimed to represent an ethnocentric NGO called Persekutuan Melayu Bugis Se-Malaysia, filed a police report against the protestors for disturbing the peace. WAO lodged a counter-complaint against the three men, but there was no immediate response from police on behalf of either party. The incident took place adjacent to a police station, in front of which the perpetrators posed for selfies to post on social media. 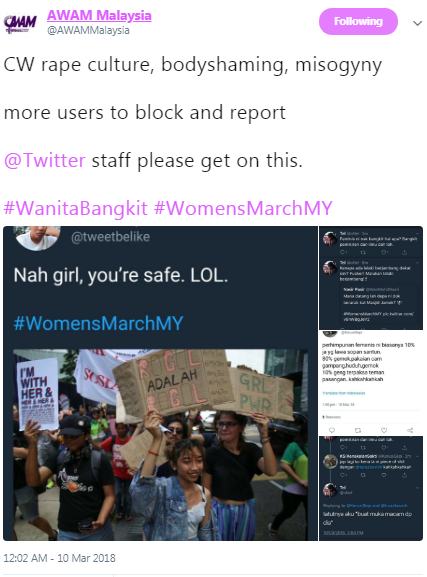 The Joint Action Group for Gender Equality (JAG), a coalition of Malaysian women’s rights civil society organizations of which AWAM is a part, issued a letter cosigned by its 11 members. JAG entreated the government, policymakers, and law enforcement to speak out against the violence and hostility towards Women’s March participants, “We call for all Malaysians to resist normalization of such sexual and gender-based harassment and violence, not only towards the participants of the Women’s March, but to women, LGBTIQ individuals and all in our everyday lives.” 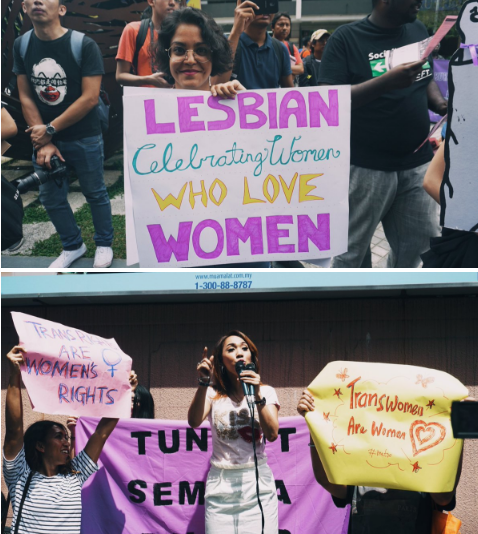 LGBTQ people are regularly harassed by citizens and police in Malaysia. Homosexuality is outlawed by both federal and Sharia law, and transgender people are criminalized under Sharia law. According to Human Rights Watch’s in-depth report, I’m Scared to be a Woman, police in Malaysia frequently neglect to investigate crimes involving transgender victims and sometimes subject transgender people to public humiliation. Homosexuality is becoming less accepted in Malaysia now than previous decades, with Malaysians aged 50 and older accepting homosexuality at a rate of 11 percent, compared to only seven percent of those aged 18 to 29 accepting it, according to a 2013 Pew Research poll.

While those numbers may not suggest a high rate of tolerance, there was an outpouring of support for the LGBTQ community and Women’s March victims after the March 10 incident. People expressed solidarity with Malaysia’s LGBTQ community online using the hashtag #CampurLGBT, meaning ‘accept’ or ‘mix LGBT’ in English. Twitter users set out to debunk the myth that gender diversity and homosexuality are unique to the West, citing Southeast Asia’s rich queer history.

AWAM works to change both Malaysian law and culture to achieve gender equality. In 1994, Malaysia ratified the Convention on the Elimination of all Forms of Discrimination Against Women (CEDAW), but the UN committee has needed to press the Malaysian government on its lack of enforcement for CEDAW provisions. Where the Malaysian government has faltered, AWAM and its allies have stepped in to form committees that draft laws aimed at enforcing CEDAW provisions like anti-sexual harassment laws and gender equality laws. AWAM also holds public education trainings that address gender-based violence, diversity in the workplace, and sexual harassment. In 2016 these trainings reached 1,400 Malaysians.

AWAM and other activist organizations are calling for the March’s increased visibility and impressive turnout to inspire a constructive conversation instead of a deconstructive one. “In fact, robust discussions on women’s rights and feminism are highly welcomed and encouraged,” the JAG coalition wrote in a letter. “We stand in solidarity with everyone who participated in #WomensMarchMY. We ask you to stand in solidarity, too.”