Women’s Learning Partnership is conducting capacity building workshops in Lebanon with refugee women of diverse ages and educational levels as part of the Empowering Syrian Refugee Women for a Better Future project. The project addresses the staggering humanitarian crisis that has forced 4.5 million registered Syrian refugees to flee in Jordan, Lebanon, and Turkey, among other countries. Three local WLP partner organizations—the Collective for Research and Training on Development-Action (CRTD-A) of Lebanon, the Sisterhood is Global Institute (SIGI-J) of Jordan, and the Foundation for the Support of Women’s Work (FSWW) of Turkey—are designing and facilitating these capacity building workshops. In addition to training activists, the Empowering Syrian Refugee project aims to build local organizations’ capacity to address the needs of refugees and facilitate their access to services.

So far, CRTD-A has organized workshops with three different cohorts of refugee women. The workshops feature sessions from WLP’s training manuals Leading to Choices, Beyond Equality, Victories over Violence, Leading to Compassion, and Leading to a Culture of Democracy (official publication forthcoming).

The workshops use WLP’s inclusive leadership model to engage participants in activities that challenge the identity of “refugee,” helping them to transition from a state of trauma to a state of empowerment and engagement with their communities. Sessions on consensus building, self-reliance, mutual respect, democratic values, and peacebuilding enable women to see themselves as capable agents of change. The first workshop in the series was held in Beirut on March 2-4, 2017. It was designed to provide supplementary skills and knowledge for Syrian women activists already making change in Lebanon’s refugee community. Most of the 12 participants held university degrees and had experience working on gender equality issues before their displacement; two participants were lawyers in Damascus and two others worked closely with victims of violence against women.

CRTD-A hosted the workshop in collaboration with Musawat and the Unite Lebanon Youth Project (ULYP), local organizations working with Syrian refugee women and youth. Five experienced trainers from Egypt and Lebanon, who have a deep understanding of WLP’s leadership, human rights, and anti-Gender-Based Violence curricula, facilitated the workshop.

During the workshop participants explored the concept of participatory leadership and ending gender-based violence in conflict settings. They developed camaraderie during the interactive sessions, particularly through roleplaying, structured exercises, and group discussions. Moreover, they were able to use the secure workshop setting to reflect on their future aspirations and their status as refugees.

Participants described the workshop as “excellent,” “useful,” and “interesting;” they reported benefiting greatly from the experience and information provided. “The chemistry between the facilitation team members is natural and efficient and kept us engaged the whole day,” one woman remarked. “I learned a lot today, and I also enjoyed myself,” added another.

CRTD-A organized a follow-up workshop on April 14 and 15 for the participants of the March workshop. The same facilitation team returned to guide attendees through topics of human rights and healing.

The workshop opened with exercises to practice critical communication skills necessary for activists, like the delivery of complex messages and collaboration with those who hold different perspectives. Another session reviewed foundational concepts of human rights and how they applied to the women’s daily lives. From there, participants were able to shift the discussion on human rights to a broader, global scale.

Participants also partook in an “unsent letter” exercise in which they wrote to a person who had inflicted pain upon them. In this safe environment, participants could acknowledge and process the trauma they had experienced as refugees. They reported that the team of facilitators was supportive, respectful, and careful to ensure the women could freely express themselves. 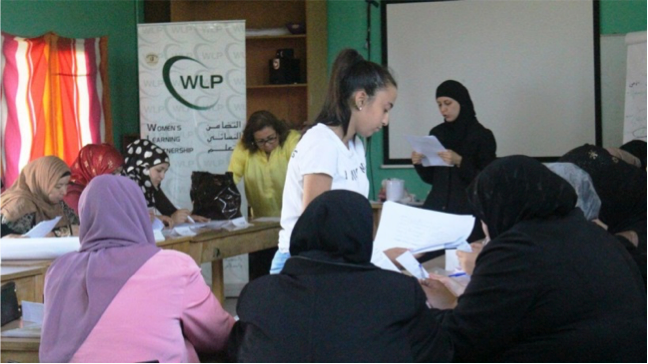 On July 3-4 and July 6-7, CRTD-A held two workshops in the village of Dbayeh outside of Beirut. The 20 Syrian refugee women who attended were members of Most Outstanding Moms (MOMS), a program empowering mothers implemented by the Unite Lebanon Youth Project (ULYP). The women’s ages ranged from 17 to 65, but most were young women with young children. All of the participants identified as housewives whose husbands work as laborers to support their families.

The workshops’ focus was on women’s leadership, but it delved into themes of human rights, violence against women, and gender roles. Three members of CRTD-A and an experienced WLP trainer from Egypt collaboratively facilitated the trainings using sessions from WLP manuals Leading to Choices, Beyond Equality, and Victories over Violence.

Workshop sessions were designed to be interactive and draw from the participants’ life experiences. The women particularly enjoyed the group activities, which provided a supportive environment to discuss sensitive issues, such as social and economic difficulties. One participant reported that “positive group dynamics of informality, acceptance, sincerity, and fun contributed immensely in achieving the main learning objectives of the training workshop.”

Participants left the workshop with a strong sense of optimism and commitment to improving their communities. Many of the exercises enabled the participants to question assumptions and beliefs with respect to women’s rights. For example, at the beginning of the workshop, many women strongly supported girls under 18 getting married to men who could be their “providers.” At the end of the workshop, several women expressed their desire to create a better life for their daughters free from child marriage.

This is the first workshop I attended where there was calmness and mutual understanding. In the past we did not use to understand each other while we were talking.
Participant from the Shatila Palestinian Refugee Camp, August 17, 2017

On August 17-18, CRTD-A held a two-day economic empowerment workshop for another cohort of women at the Shatila and Burj Barajneh Palestinian Refugee Camp in Beirut. The 18 participants—Palestinian refugees from Syria and Lebanon as well as Syrian refugees—were invited because of their interest in or engagement with income-generating activities.

Dr. Amal Moukarzel, a longtime collaborator of CRTD.A., facilitated the workshop using sessions from Leading to Choices and Leading to Compassion. It was held in cooperation with Association Najdeh, a feminist secular organization working with local Palestinian refugee communities. The organization’s field interviews with refugee populations served as inspiration for the development of the workshop’s agenda.

Participants benefited from open discussions and roleplay exercises on the principles of teamwork and ethical, compassionate, and participatory leadership. The workshop sessions reviewed practical tools and knowledge to support the women’s efforts as entrepreneurs, but also provided them a space for personal reflection and peer support. One participant recited a poem she composed about her experiences as a refugee, leaving many participants visibly moved. According to the participants, the workshop was most successful in building their self-confidence and increasing their economic autonomy.

The participants will apply what they learned in the workshop to their income-generating projects and share this knowledge with other women in their communities.

WLP’s Empowering Syrian Refugee Women for a Better Future project will continue to build the capacities of displaced women to engage with their host communities, advocate for human rights, and transcend the identity of “refugee” and the cycle of victimhood. CRTD-A staff has planned follow-up “refresher” workshops and evaluation trainings with each of the cohorts in fall 2017. They also will continue to share their experiences, knowledge, and lessons learned with WLP partners in Jordan and Turkey that are implementing the project with refugee communities in those countries. Through this collaboration, displaced Syrian women will continue to benefit from tools and resources that help them claim their rights.

Women from Across the Middle East and Africa gather for Peace, Security, and Equality – Nigeria

When women are part of peacebuilding processes and negotiations, the stability and quality of that peace increases. However, according to UN Women and the Council of Foreign Relations, “between 1990 and 2017, women constituted only 2 percent of mediators, 8 per cent of negotiators, and 5 per cent of witnesses and signatories in all major peace process.” WLP is addressing this disparity in women’s representation at the peace table through leadership and capacity-building workshops with refugee women, grassroots activists, and local civil society organizations.