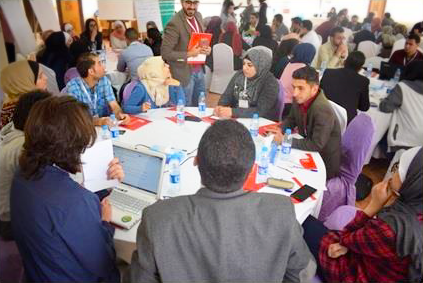 WLP’s partner organization in Jordan, Sisterhood is Global Initiative (SIGI-J), held its ninth annual Youth and Technology Conference in Aqaba, Jordan in March of 2017. SIGI-J has organized and facilitated the conference since its inception in 2009. This year's theme was “Building Youth Leadership to Participate in Municipal and Provincial Council Elections.”

At the end of each conference, participants propose and vote for a relevant social, political, or economic issue facing young Jordanians on which to focus the following year. Conference organizers facilitate workshops that enhance participants’ capacities to use modern technology to affect change in the context of that year’s chosen issue.  Previous conferences have addressed various subjects related to women's rights, such as violence against women, economic empowerment, and the effects that extremism and terrorism have on young women in Jordan.

Participants chose “Building Youth Leadership to Participate in Municipal and Provincial Council Elections” as 2017’s theme in an effort to galvanize youth leaders ahead of Jordan’s local elections, which were held throughout the country on August 15, 2017. Until then, Jordan had a centralized government in which its capital, Amman, held complete political power. The redistribution of power began in 2015 with the passage of the Decentralization Law and the Municipalities Law. The former created provincial administrations and the latter gave the Jordanian people the power to elect municipal councils and mayors, which were positions previously appointed by the cabinet in Jordan.

In the buildup to the elections, there was some confusion about whether the elections were worth voting in and how the decentralized administrations would function. The government led a small information drive touting the elections as the first opportunity for citizens to vote directly for local officials. Jordanian civil society made significant contributions to the municipal election get-out-the-vote campaign with events like the Youth and Technology Conference. 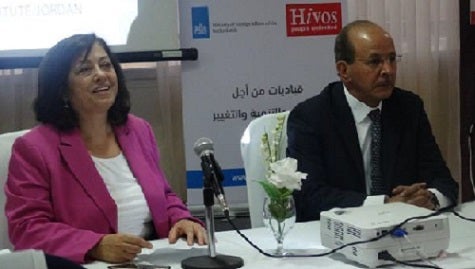 Asma Khader of WLP Jordan/SIGI-J inspires youth to be agents of change for Jordan.

Asma Khader, CEO of SIGI-J, gave the Youth and Technology Conference commencement speech to an audience of 81 young people. Around 70 percent of Jordan’s population is under the age of 30, which Khader described as advantageous because of its potential to drive Jordan’s economic development. She inspired them to believe in their capacity to lead a movement for social change, starting with learning about the decentralization laws and voting in the then-upcoming municipal elections.

At one of the conference’s workshops, facilitator and professor Mounir Edibes focused on social media’s role in enhancing political participation and supporting women candidates in the municipal elections. Edibes helped participants realize social media’s immense power, especially in the hands of technologically inclined young people. The workshop explained how vital this tool is in today’s political campaigns because it can reach countless people at a low cost.

Participants put their skills to the test and produced a variety of initiatives to post on social media. Each initiative motivated Jordanian youth to participate in municipal elections and ranged in format from cartoons explaining decentralization to short documentaries depicting the success of women running for local office.

Jordan’s municipal elections garnered a 32 percent voter turnout, a five percent decrease from the 37 percent of eligible voters who participated in 2016’s general election. Participation rates were especially low in cities: 16 percent of all eligible voters in Amman participated in the municipal elections, and 3.4 percent of women in the capital voted. Some speculate that many urban voters stayed home on election days because of a belief that the central government, which retains complete control of the budget, would only allocate funds to its electoral base in rural Jordan.

Through this election season, Youth and Technology Conference participants applied lessons learned at the event. With new skills and an appreciation for their roles in achieving social justice, they left with the understanding that they may not reach their goals through a single election, but that their patient and persistent activism will eventually lead to change.