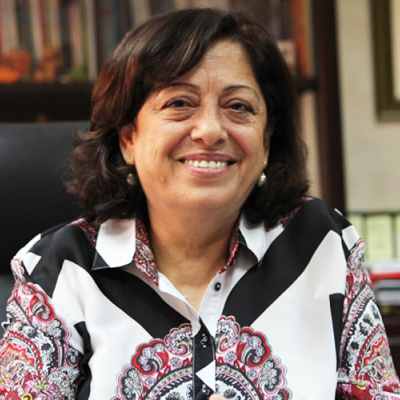 Khader (Jordan) is a leading human rights lawyer based in Amman. She has over 40 years of experience as a specialized lawyer in human rights and legal protection of victims of human rights violations. Khader is a civil society activist in Jordan at the national, regional, and international levels, and is a gender consultant and founder and CEO for Solidarity is Global Institute/Jordan (SIGI/J). Khader is the co-founder and leader of many Jordanian and Arab NGOs and a member of the Royal Commission for the Drafting of the Jordanian National Charter. She played an important role as a member of the Royal Commission for Human Rights and was appointed as a board member of its successor, the National Centre for Human Rights. Khader's national appointments include Minister of Culture (2003-2005); Minister of State and the official spokesperson for the Jordanian Government (2013); Member of the Jordanian Senate (2013); Secretary General of the Jordanian National Commission for women (2007-2014); and Commissioner at the Independent Election Commission (2014-2016).