Overturning Article 308: A Profile of Asma Khader and WLP Jordan/SIGI/J 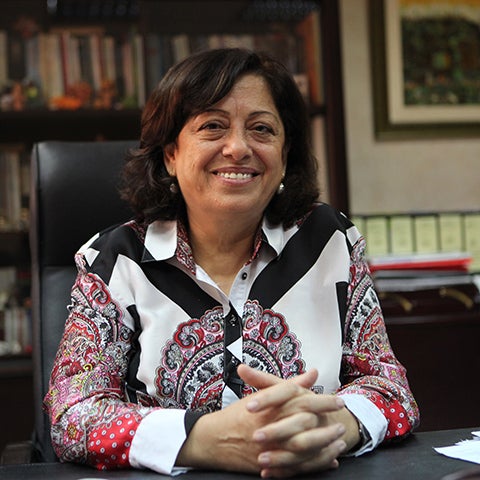 This content was originally produced for the International Development Research Centre in Canada.

Until a few months ago, rapists in Jordan could escape criminal punishment if they married their victims. This past August, the Jordanian parliament repealed the loophole that permitted this injustice. The abolishment of the law, known as Article 308 and called the "Marry Your Rapist Law" by human rights activists, is a significant step forward for Asma Khader, the Sisterhood is Global Institute/Jordan (SIGI/J), and the Women's Learning Partnership (WLP), who have been fighting for this day for decades.

SIGI/J is a founding member of WLP, a global partnership of 20 organizations located around the world.  The Partnership has trained women leaders, advocated for women's human rights, and strategized to overcome barriers to women's equality for more than 15 years.  Together, partners have created culturally and linguistically adapted learning tools and curricula, built the capacity of civil society organizations around the world, and developed innovative templates for collective action.  WLP works from the local to the global and back again, bringing lessons learned at the grassroots level to the forefront of regional and international dialogues to facilitate learning and exchange.  As part of WLP's initiative to reform discriminatory family laws such as Article 308, SIGI/J is conducting research with the support of the International Development Research Centre (IDRC) on the impact of these laws on women's rights and the way forward for reform.

For activists like Khader, the repeal of Article 308 in Jordan is a product of years of organizing, coalition building, collecting research, and lobbying lawmakers. Khader first became involved in overturning the controversial law in the early 1980s.  As a lawyer, she was appointed as an expert evaluator to a high-profile case involving a 14-year old girl who had been raped by an older cousin.  The perpetrator tried to marry the girl to avoid punishment, but the girl and her family refused and the case went to court.  The perpetrator was eventually sentenced to seven years in jail, but Khader realized that this girl was one of the few who have been able to get justice for the crimes committed against them.  She saw the devastation that Article 308 inflicted on girls and their families.  In addition to the trauma of the rape, girls who were forced to marry under the law were subjected to a lifetime with their abuser with serious consequences for their health, education, and livelihoods.

Khader reached out to leaders and civil society organizations to speak out against the law.  The eventual founding of SIGI/J in 1998, which became WLP's partner in Jordan, was also a pivotal moment.  SIGI/J began conducting leadership and advocacy trainings on this issue and helped to connect 255 civil society groups and women's organizations across Jordan and in the MENA region.  A few years later, SIGI/J released the Jordanian Women's Charter, which identified eight discriminatory laws to repeal, including Article 308.  Forty women's organizations signed on to support the Charter, broadening the coalition and creating the framework for action.

Despite this progress, Khader knew that public opinion was the key to overturning Article 308 and that the coalition's approach had to be multi-pronged.  Khader says, "We put pressure from all sides to reform this law."  Under her leadership, SIGI/J began documenting cases, speaking with victims, and using both the qualitative and quantitative data they were collecting to analyze the impact of the law. SIGI/J shared the personal stories and analysis with communities throughout Jordan to raise awareness about the issue.  They also set to work creating petitions and gathering support.  Using methodology and curricula that SIGI/J developed as a founding partner of WLP, they continued training activists and leaders in the coalition, focusing especially on young men and women and encouraging them to start their own local campaigns, which SIGI/J realized was crucial to getting the attention and support of the Members of Parliament.  Khader notes that "this was important because MPs will listen to their voters."

SIGI/J reached out to all sectors to increase support for repeal.  They sent press releases to the media to ensure that the topic was consistently in the news.   They approached religious leaders, who eventually agreed after years of meetings and lobbying that the research proved Article 308 was not an Islamic law.  Khader and SIGI/J leveraged key international days of advocacy to bring attention to their cause.  During the 2015 16 Days of Activism to End Violence Against Women, which was launched by the Center for Women's Global Leadership at Rutgers University, SIGI/J released survey data they had spent a year collecting.  An overwhelming 72% of Jordanians were in favor of abolishing the law and 90% said that the perpetrators should be punished for their crimes.  The survey was distributed in 16 statements in Jordanian newspapers, one for each day of action.  The same year, SIGI/J collected over 14,000 signatures from Jordanian citizens demanding that Article 308 be overturned, which they presented to policymakers.  The coalition also prepared a position paper based on a legal study SIGI/J conducted.  A delegation of lawyers and activists from SIGI/J presented the paper to the Prime Minister and the Cabinet.

By the end of 2016, the momentum to overturn Article 308 was at an all-time high.  In early 2017, as part of the WLP initiative supported by IDRC, SIGI/J undertook a comprehensive study of the reform of family laws in Jordan, targeting the legislation that is particularly detrimental to women. Article 308 was highlighted as a top priority and the leaders of the coalition decided to lobby politicians to put its repeal on the Parliamentary agenda. The debate leading up to the repeal was heated, but the coalition continued its widespread public advocacy and contacted each Member of Parliament to inform them of the injustice of Article 308. On August 1, 2017 Parliament voted for a full repeal of Article 308.

Reflecting on this victory, Khader says that reform was possible because of the multiple strategies used to combine organizing and alliance building, raising awareness at community levels, research and knowledge generation and engaging directly with decision makers.  But for activists in Jordan, the work isn't done. SIGI/J and its supporters and coalition members are turning their attention to other discriminatory laws, such as laws that allow light punishment for honor crimes and deny women's access to abortion.

For WLP, the repeal of Jordan's Article 308 is one of the many successes the Partnership has achieved in reforming discriminatory legislation and WLP partners are using the lessons learned from Jordan's successful campaign to continue to fight for women's equality in their countries.  WLP will be launching a knowledge-based global advocacy campaign on family law reform building on research conducted throughout the Partnership.  As a prototype of a successful local to global reform effort, the abolishment of the "Marry Your Rapist Law" reveals what can be accomplished with collective strategies, support, and vision.