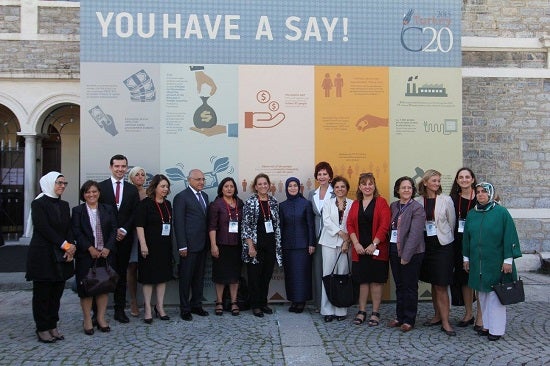 C20 attendees meet in advance of the annual G20 Summit.

More than 500 participants from 52 countries convened at Istanbul’s Boğaziçi University for the annual Civil Society 20 (C20) Summit on September 15-16 in 2015. Each year, C20 brings together civil society organizations (CSOs) from around the world to prepare evidence-based policy recommendations for the international forum of 20 major economies known as the Group of Twenty (G20). The C20 Summit is hosted in the same country as the annual G20 Summit, which was held in Antalya, Turkey on November 15-16, 2015. The C20 is a unique opportunity for leading human rights activists to hold G20 decision-makers accountable by recommending policies from a grassroots perspective.

WLP’s partner organization in Turkey, Foundation for the Support of Women’s Work (FSWW), was one of 14 CSOs who made up C20 Turkey’s steering committee, which was tasked with making the summit’s logistical arrangements and determining the agenda. Whereas G20 membership is exclusive to 20 of the world’s wealthiest countries, the C20 steering committee sought to increase representation of the world’s Least Developed Countries (LDCs). Before the summit, the steering committee surveyed CSOs from 91 countries, including 55 non-G20 countries and 14 LDCs, as part of its effort. The survey results were the basis for the C20 Summit’s agenda, and the subsequent policy recommendations were compiled in a communiqué that was published at the end of the summit.

The steering committee decided on five categories of global issues to tackle: inclusive growth, international taxation, anti-corruption, climate change and energy sustainability, and gender equality. Each category had a corresponding working group of experts that were responsible for developing recommendations to send to the G20 Summit.

These issues are wide-ranging, but also interconnected. Iranian lawyer, activist, and WLP representative Shadi Sadr took part in the summit and embraced the challenge of taking on these interdisciplinary issues in conjunction with each other, as opposed to independently. She was encouraged that the working groups addressed problems like tax corruption and climate change through a gendered lens since these problems can disproportionately affect women. The Gender Equality Working Group, for instance, collaborated with other working groups to recommend that the G20 “champion progressive tax systems” because they are more gender equitable and promote inclusive growth. 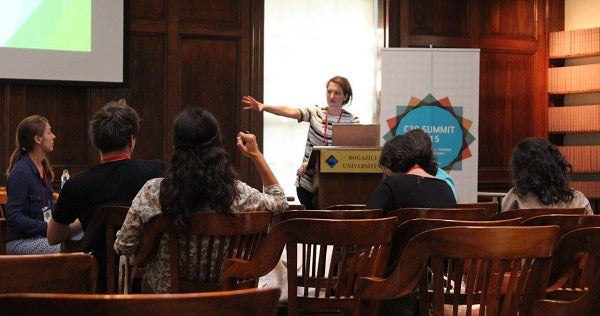 C20 participants discuss recommendations for the G20 at Boğaziçi University.

The WLP Partnership was well-represented in C20 Turkey’s Gender Equality Working Group. FSWW Executive Director Şengül Akçar served as co-chair of the group and several other WLP representatives, largely from non-G20 member countries of the Global South, attended the event, led discussions, moderated panels, and contributed to the communiqué.

In these lively gender equality discussions, participants challenged each other to identify precise recommendations to give to G20 decision-makers. The process of narrowing down their ideas required moderators to refine and build upon participant-generated ideas on dozens of easel pads that hung from the conference room walls. Participants likened the process to cooking up ideas in the kitchen, always improving upon their collective recipe.

WLP representatives from Egypt, Jordan, Pakistan, Palestine, and Senegal, as well as Iranian diaspora lawyers and scholars, spoke on and moderated several panels: 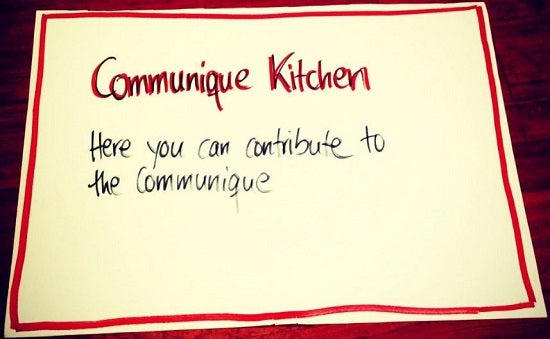 The Gender Equality Working Group at the C20 Summit developed recommendations for the G20, a participatory process they described as the creation of a collective recipe.

Recommendations to the G20

The C20 Summit’s Gender Equality Working Group condensed its ideas into eight recommendations, which were incorporated into the final communiqué to the G20. The document’s 36 total recommendations identified increasing women’s access to work and remunerating unpaid, informal work as top priorities. Globally, the share of working-age women (15+) in the labor force has declined from its three-decade peak of 51.5 percent in 1992 to 48.7 percent in 2017.

Women face barriers to employment because of their gender in almost every country. In Turkey, the government spends less than one half of a percent of that country’s GDP on family benefits like affordable child care, which confines many women to traditional care work in the home. WLP’s partner in Turkey FSWW is working to fill in the child care gap, and increase women’s access to work. FSWW and its partner co-ops have opened 23 women-run early childhood education centers for low-income families from Istanbul to Southeastern Anatolia. These co-ops help their members meet basic needs for child care and provide opportunities for women to enter the workforce thereafter.

The communiqué also recommended that the G20 summit “champion gender equitable macroeconomic politics, such as…securing women’s property rights, particularly to land and housing.” Women’s rights to land are often regulated by family laws, which tend to favor men in important economic matters like inheritance, land ownership, and land use. Such laws can create discriminatory patterns at home and in the public sphere that not only affect women’s livelihood, but also justify physical and institutional violence against women. (Click here to read more about WLP’s is campaign to reform discriminatory family laws.)

In addition to the concrete policy recommendations sent to the G20, the C20 Turkey Summit fostered international cooperation among civil society organizations. C20 Summit attendee Ada Amon of E3G, a think tank that works on climate issues, said that she looks forward to teaming up with people she met at the Summit. “A lot of people are working on the same issues [as us], and we can cooperate in the future” she said.