AMBASSADOR AND PROFESSOR OF ENGLISH 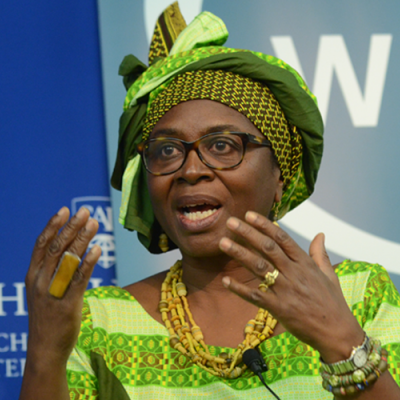 Abena Busia (Ghana) is Ambassador of Ghana to Brazil, with concurrent accreditation to the other twelve Republics of South America. She is Professor of English at Rutgers University, where she was formerly Chair of Women’s and Gender Studies and Director of the Center for African Studies. Busia earned a B.A. in English and D.Phil in Social Anthropology from Oxford University. She has also served as president of both the Association for the Study of the Worldwide African Diaspora and the African Literature Association. As a philanthropist, she is the current Board Chair of AWDF-USA, the sister organization to the African Women's Development Fund.  The AWDF is the first and only Pan-African funding source for women-centered programs and organizations. Busia has authored over fifty articles and book chapters. Her academic achievements include being project co-director and editor of the four-volume Women Writing Africa Series (2002-2008), co-editor of Theorizing Black Feminisms (1993) and Beyond Survival: African Literature and the Search for New Life (1994), and the author of two collections of poems, Testimonies of Exile (1990) and Traces of a Life (2008).