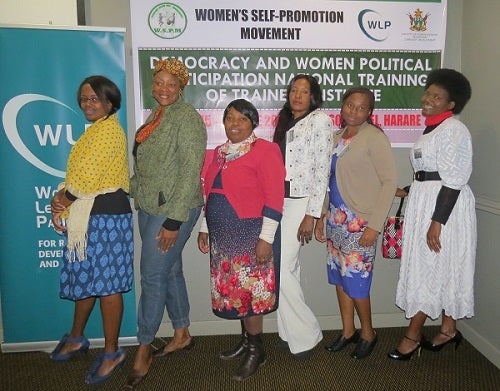 WSPM in Harare, Zimbabwe has been a WLP partner since 2002.

WLP’s partner in Zimbabwe, Women’s Self-Promotion Movement (WSPM), is gearing up for general elections taking place on July 30, 2018. WSPM convened a group of 26 aspiring politicians and leaders of women’s rights organizations for its June 5 to 8 training of trainers (TOT) on political participation in Harare, Zimbabwe. Many of the participants attended WSPM’s previous TOT in October of 2017, where they were galvanized to support female candidates and even run for office in the upcoming elections.

The July 2018 general elections will be the first since longtime president Robert Mugabe stepped down after a military coup in November 2017. The leader of ruling party ZANU-PF, Emmerson Mnangagwa, took Mugabe’s place on an interim basis and is running in the hotly contested elections. There are 23 presidential candidates, four of whom are women. In parliament, women hold 33 percent of the seats, a proportion that WSPM is working to increase by eroding some of the barriers women face in politics.

Participants came from 23 organizations in rural and urban provinces. While they represented constituencies with varied interests, the participants were united by their passion for women’s empowerment in political arenas. Their convening in the Zimbabwean capital enabled them to build a network of women’s rights activists who are organizing to increase women’s role and voice in all levels of government.

TOT facilitators highlighted the importance of building strategic partnerships to increase women’s political representation with sessions in WLP’s manual Leading to Action. In one session, participants discussed a case study about a coalition’s successful campaign to reform family laws in Morocco. The Morocco coalition successfully united people from all social strata to reform that country’s family laws including activists, politicians, and academics. 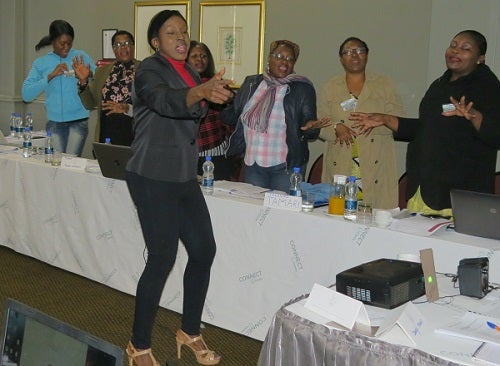 WLP workshops are dialogue-based and interactive.

The spirit of the Morocco movement resonated with the TOT participants. The consensus of the group was that more can be achieved if women join forces instead of competing. Eighty-five percent of participants reported developing new connections with other women’s rights activists or civil society organizations through the training. “To have real emancipation in Zimbabwe, we have to start supporting each other,” said TOT participant Linda Masarira.

Masarira, a grassroots activist and mother of five, began building coalitions and community organizing while working as a train operator. She mobilized her fellow train drivers to advocate for better labor rights, an experience that inspired her to engage in activism full-time. After contributing to an anti-Mugabe strike in 2016, she was sent to prison.  Her struggle for civil rights persisted even while she was incarcerated. Masarira organized an inmate protest against the jail’s inhumane living conditions, which subsequently landed her in solitary confinement. Since her release, she has earned a leadership position in opposition party MDCT and is now campaigning for Harare Central’s seat in Parliament.

Connecting with People Through Media

With the elections less than a month away, participants agreed that fostering a more positive and more visible relationship with the media was crucial for political candidates. Facilitators dedicated a session of the training for mock-interviews to simulate the pressure of speaking with journalists.

Esther Vongai Zimudzi, 21, attended the workshop as one of the youngest ever candidates for the Harare city council. This media training was a valuable experience for Zimudzi and the other political aspirants at the TOT.

In addition to training in traditional media, political candidates and organizers bolstered their skills in social media engagement. Most participants will use social media as part of their post-TOT action plans. Zimudzi and each of the other TOT participants running for office have used tools like Facebook and Twitter to increase their visibility as candidates, and others will use social media platforms for mentorship outreach and gaining more exposure in traditional media. Crucially, their network will remain connected via social media once they return to their communities.

TOT participants Lauretta Sithole and Nonduduzo Ncube from YIELD Trust, an NGO that promotes youth leadership in Zimbabwe, were motivated to help young women in politics market themselves through new media channels. They committed to having young women political candidates as guests on their podcast about political issues in Zimbabwe, Youth Conversations, so that they may have a space to talk about their platforms.

In a circle with arms linked, participants took turns talking about the most inspirational women leaders in their lives. They paid homage to the mothers, community leaders, and politicians whose qualities motivated them to become leaders. They discussed a pervasive myth in Zimbabwe that women are their own worst enemies. The unofficial slogan of the TOT emerged: “Pull Her Up.”

The 26 activists and leaders at the TOT set out to debunk this myth starting with plans to mentor and support each other. As one participant said, “As women, we need to celebrate other women. That can be uplifting and encouraging.”

Leading up to May 15th, International Day of Families 2019, WLP will hold a Partnership-wide digital awareness campaign including to raise awareness about the need for #GenderEqualityinFamily. Our partners, allies, and followers will be able to engage with our campaign by sharing info-graphic facts about inequality in the family and attending a webinar hosted by WLP staff and partners.