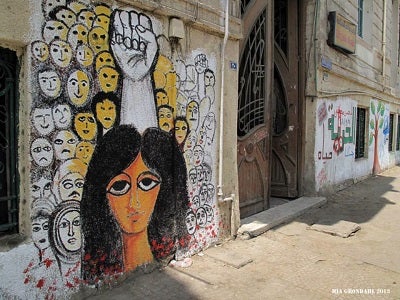 WLP’s first online forum event explores the intersection of gender, identity, and activism, through the experiences of five young activists and artists in the Middle East North Africa region. Hailing from Egypt, Iran, Lebanon, Morocco, and Yemen, forum participants are driving forces for change through art, public protests, and journalism, as they bolster political skills, democratic values, and gender awareness of local citizens.

Though contemporary political environments are diverse across speakers' homelands, all regions are marked by large populations of youth seeking new freedoms and social and political structures. As with many countries throughout the globe, these societies reflect pervasive gender inequality that impacts daily life and influences how individuals seek to shape society.

Streaming from the interactive online event site Shindig, forum panelists will share how political systems and gender norms have influenced their identity, and how each person is striving to transform culture and their place within it.

Following speakers’ comments, Forum attendees are invited to participate in a live Q&A, via video or audio chat, or instant message.

Shindig is a highly interactive tool; we welcome active participation of the audience using your preferred interface (video, audio, or IM).

Atiaf Zaid Alwazir (Yemen) is a freelance researcher and writer focusing on social movements, in particular in relation to women, and youth;  and role of regional and international policy in Yemen.  Her work has appeared in Foreign Policy, The Arab Reform Initiative, Project on Middle East Democracy (POMED), Jaddaliya, Al-Akhbar, Huffington Post, the Guardian, and other outlets. She is also the co-founder of the media advocacy group SupportYemen (www.supportyemen.org). She chronicled the Yemeni revolution on her blog (http://womanfromyemen.blogspot.com/) with commentaries, videos, and photographs. She has an M.A. in international relations, and Her thesis focused on Women in Prison in Yemen, between honor and crime.

Jihane Hannane (Morocco) is a 22 years “young” feminist activist with Association Démocratique des Femmes du Maroc (ADFM), WLP’s partner in Morocco, and is currently completing her studies in Political Science, with honors. Jihanne also works for the International Labour Office in Rabat. Previously, she was selected to participate in the country’s parallel youth government, in which she held the position of Youth Minister for Solidarity, Women, Family, and Social Development. She has also worked on issues pertaining to social entrepreneurship with the organization Students in Free Enterprise (SIFE) and was responsible for communication  for the African Youth Initiative for Climate Change (AYICC).

Hayat Mirshad (Lebanon) is a feminist and human rights activist, researcher, trainer and journalist. She is a co-founder of FE-MALE, a non-profit organization, founded in 2012 by a group of young Lebanese women and human rights activists, and editor at Sawt Al Shaab, where she volunteers to produce and present the first feminist radio program in Lebanon and the Middle East, "Sharika wa Laken." She also currently works as a media officer and project coordinator for the "Women’s Response to the Arab Spring" project at the Lebanese Democratic Women Gathering and is active with many civil society and women organizations and campaign such as the Lebanese Women Right to Nationality Campaign, through participating in their awareness campaigns, demonstrations, and other mobilization events. She previously worked at the Collective for Research and Training on Development-Action CRTD.A, WLP's partner in Lebanon, for four years as a project officer for the Active Citizenship and Gendered Social Entitlements project. In addition to that, she is a freelance reporter at Lel Nasher, a weekly talk show hosted by Tony Khalife at Al Jadeed TV Production.

Noora Flinkman (Sweden/Egypt) is the Communications Manager for Harassmap, an NGO dedicated to combating sexual harassment in Egypt. Her interest in gender studies and rights activism brought her from Sweden to Jordan, Saudi Arabia, and finally to Egypt where she finished her M.A. in Middle Eastern Studies and joined HarassMap. Noora also has a bachelor’s degree in Peace and Development Studies.

Nikoo Tarkhani (Iran) was born in Tehran, Iran. She graduated from medical school but her enthusiasm and passion was always Art. Since 2001 she has participated in numerous exhibitions in Iran, Sweden, Mexico, the UK, Brazil, the UAE, Germany, and elsewhere.

Works of Nikoo and Atiaf have been featured in the International Musuem of Women exhibit, Muslima.

Night of the Wolf: How Iran's Innovative Vaccine Defeated Rabies

To celebrate the Nowruz holiday, the Foundation for Iranian Studies with Women's Learning Partnership invites you to the virtual event, "Night of the Wolf: How Iran’s Innovative Vaccine Defeated Rabies."

WLP hosts an annual, week-long strategic planning event and celebration that is attended by the directors of all of our partner organizations, our Board of Directors, and members of our Advisory Council.