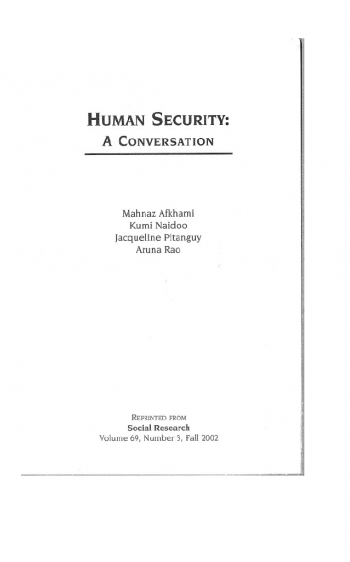 This article first appeared in the Fall 2002 issue of Social Research journal, and resulted from a May 12, 2002 meeting of experts on the topic of human security.

Mahnaz Afkhami (President and CEO of WLP/Iran), Kumi Naidoo (Secretary General of Amnesty International/South Africa), Jacqueline Pitanguy (Founder and Director of Cidadania, Estudo, Pesquisa, Informação e Ação (CEPIA)/Brazil), and Aruna Rao (Co-founder and Executive Director of Gender at Work/India) discuss the limitations of traditional ideas about state security, which does not generally encompass the security of individuals, and the advantages of a human security approach. Their shared security objectives include the promotion of human welfare, power-sharing, sustainable development, social justice, human rights, gender equality, and democracy. The May 12 conversation and subsequent article were a prelude to WLP’s organizing a policy action group on human security with the support of the State of the World Forum.