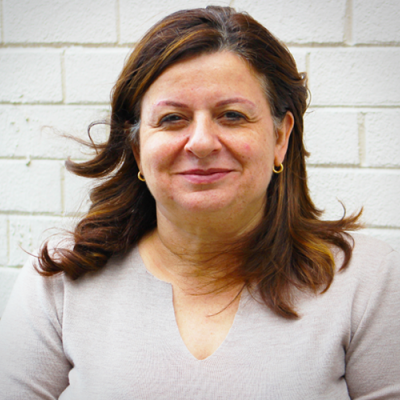 Lina Abou-Habib (Lebanon) is an expert in mainstreaming gender in development policies and practices and in building capacities for gender mainstreaming in regional and international agencies as well as public institutions.

Abou-Habib provided programmatic oversight in each of WLP’s partner countries, guided WLP’s organizational development and fundraising efforts, and led WLP’s Global Training of Trainers Initiative, which seeks to build the capacity of partner organizations. She is the former Executive Director of WLP Lebanon/Collective for Research and Training on Development–Action (CRTD-A), and is a co-founder and coordinator of the Machreq/Maghreb Gender Linking and Information Project. She is a former chair of the board of the Association for Women’s Rights in Development (AWID), and she currently is a MENA advisor for the Global Fund for Women and on the editorial board of Oxfam’s journal, Gender and Development. She holds an M.A. in Public Health from American University in Beirut.

Abou-Habib has been featured as an expert speaker and panelist in the MENA region and internationally. She has appeared on Al Jazeera, CNN, CBC, Fox News, France 24, al Mayadeen, Sky TV, Press TV, BBC English and Arabic, as well as on local broadcast networks in Lebanon, Egypt, Morocco and Bahrain.

She has published several research articles in international journals on action oriented research on the impact of the denial of citizenship rights to women in MENA countries; active citizenship and gendered social entitlements in Lebanon, Palestine and Egypt; and topics related to women's political participation, invisible care work, economic contribution in rural communities and access to markets, faith based organizations, migrant women and refugees, and women in post-war Lebanon. Abou-Habib’s articles on action oriented research have appeared in Oxfam’s Gender and Development Journal, Royal Tropical Institute’s Source Book, and Routledge.