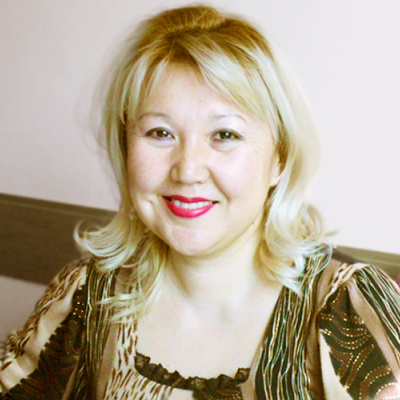 Karakulova (Kazakhstan) works with marginalized groups for greater inclusion in decision-making processes and to improve their social status and social participation. Shymkent Women’s Resource Center (SWRC) focuses on leadership development, freedom of speech, the right to personal safety, and the prohibition of discrimination against women. In 1999, Karakulova implemented a SWRC project on women's leadership, which is still ongoing. From 2002 to 2008, she ran shelters for women who were victims of domestic violence and trafficking. In 2007, she opened a social beauty salon that provided vocational training and certification to promote the economic independence of girls and women. In 2005, Karakulova earned a diploma from the Minister of Environment for her participation in the National Women's Fair of ideas and goods, “Inspired woman-2.” She has taught Russian, Kazakh, and World Literature in the South Kazakhstan State University. Karakulova is a member of the National Commission for Women, Family, and Demographic Policy at the mayor’s office in Shymkent, and she is a patron of the orphanage № 4 in the village Sairam in South Kazakhstan.