From Survivors of Violence to Agents of Change: WLP Mozambique Trains Women to be Leaders in Cabo Delgado

In Mozambique’s northernmost province of Cabo Delgado, women and girls have been disproportionately impacted by five years of violence. Fórum Mulher/WLP Mozambique is training women in the region to be leaders, defend their rights, and advocate for change.

“In conflict situations, women are the ones who suffer the most,” says Sheila Mandlhate, a Coordinator at Fórum Mulher, WLP’s partner in Mozambique. In Cabo Delgado province, women and girls have been subject to immense violence, stigmatization, and discrimination throughout the course of a five-year conflict. “Many women in Cabo Delgado have seen their children and spouses killed, and they could do nothing,” Mandlhate informs WLP. She describes rape, displacement, and economic insecurity, noting that “even in refugee camps, women have fewer rights than men.” 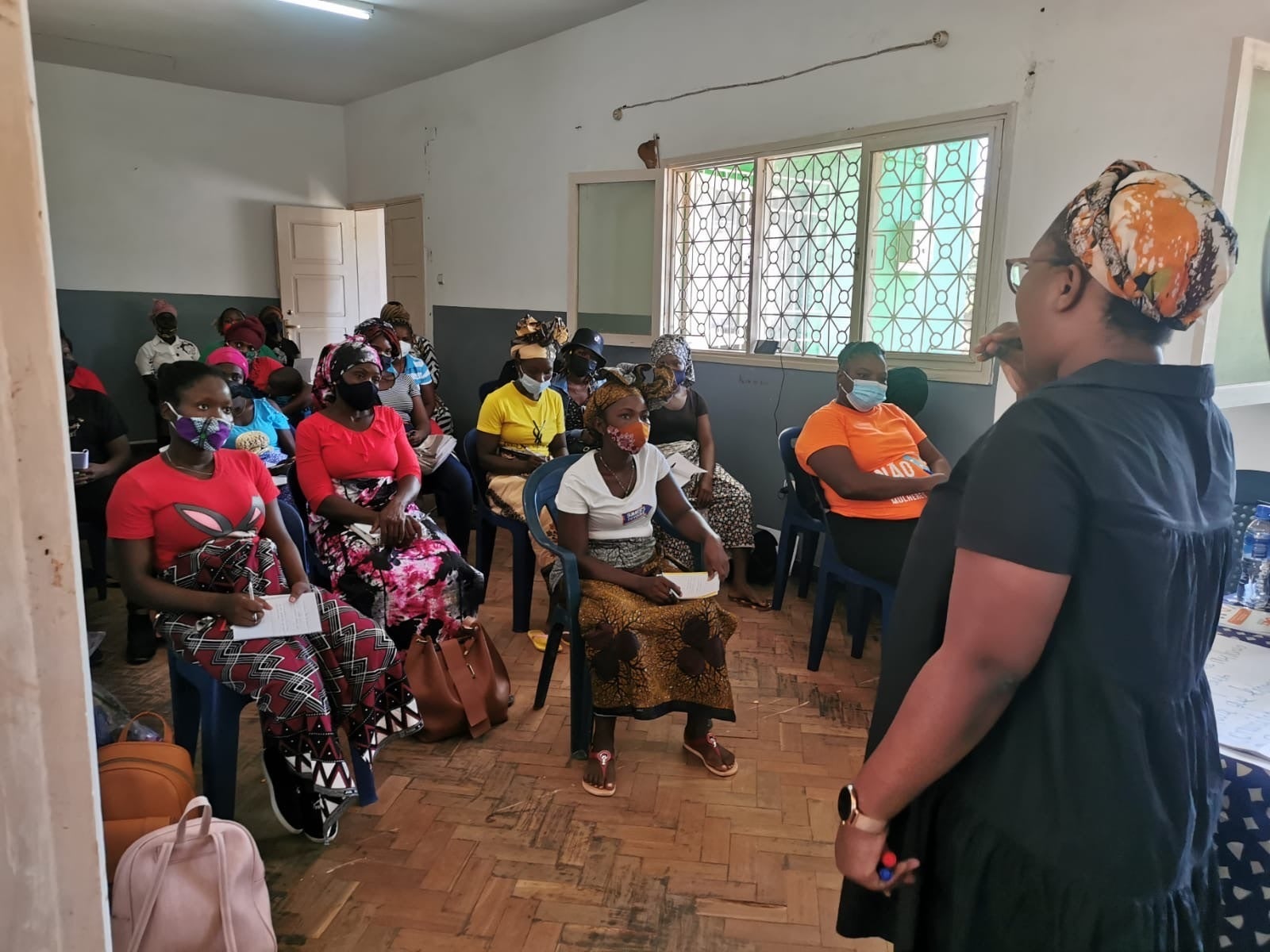 Fórum Mulher believes that when women’s voices are heard, change can happen. Based in Maputo, Fórum Mulher works in partnership with civil society organizations (CSOs) across Mozambique to increase awareness of women's human rights and enhance women’s political participation. Using WLP’s curriculum and training methodology, the organization conducts Training-of-Trainers institutes (TOTs) on numerous themes including women’s leadership, gender-based violence, and sexual and reproductive rights. “With training [in Cabo Delgado],” Mandlhate states, “women’s lives can be strengthened so that they have knowledge that they are leaders and that they can advocate for their rights.”

The violence in northern Mozambique stems from a complex set of interrelated factors. Beginning in October 2017, an extremist Islamic militant group known as both Ansar al-Sunna and al-Shabaab (Note: unrelated to Al-Shabaab in Somalia) began conducting attacks against civilians and government security forces in an effort to build an Islamic state in the region. Multidimensional social, economic, and environmental conditions, including widespread poverty, unemployment, corruption, and natural disasters have further destabilized the region.

In 2020, Fórum Mulher conducted a study and found that women and girls have been kidnapped, raped, forced into sexual slavery and prostitution, and displaced. The study further found that in camps for Internally Displaced Persons (IDPs) from the Cabo Delgado region, women often face unsanitary conditions and lack access to water, healthcare, and food. Despite the extensive suffering of women in the region, when Fórum Mulher analysed the 2020 media coverage of Cabo Delgado, it found only 21 mentions of women in 857 stories on events in the region. 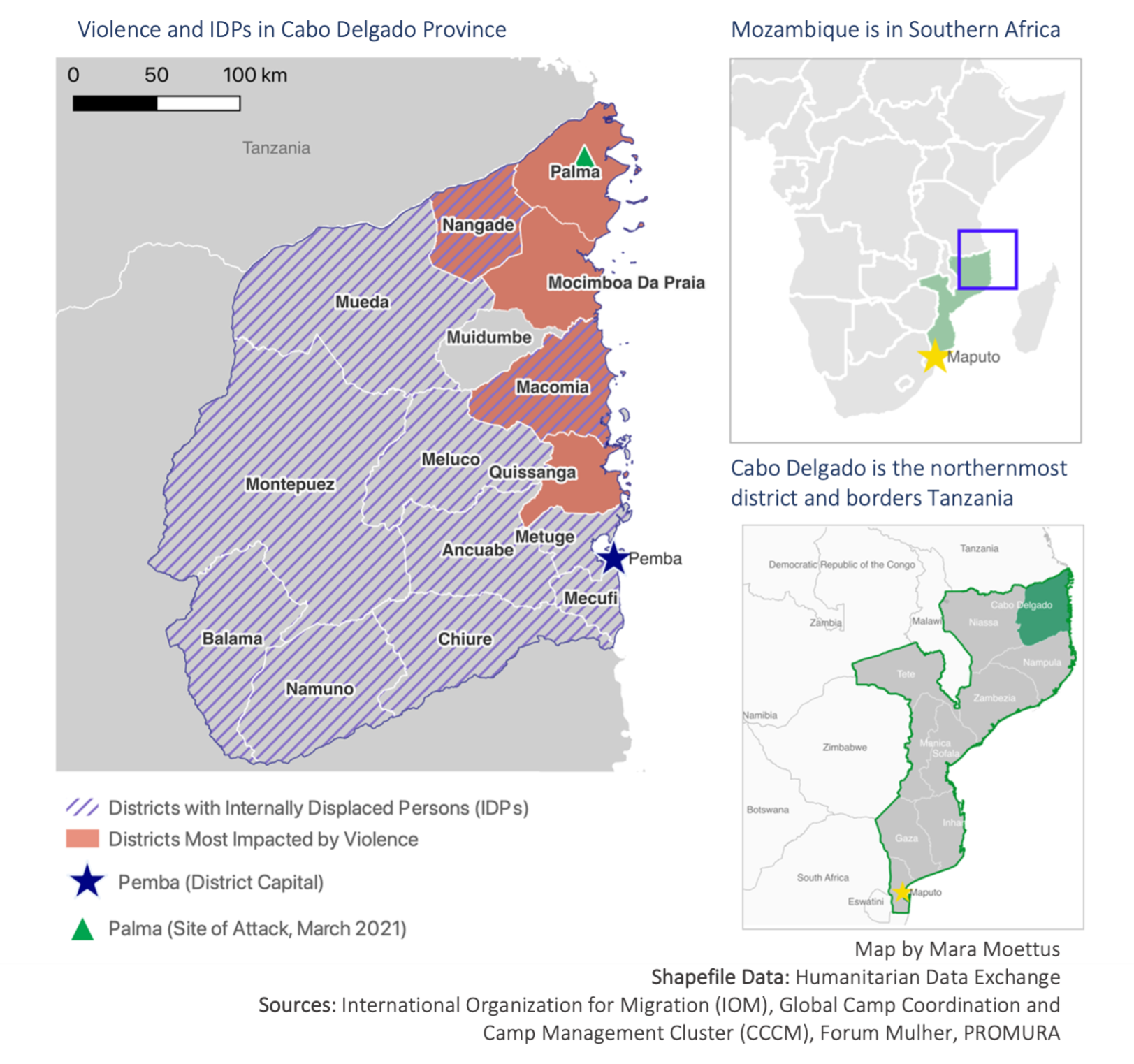 The presence of foreign energy companies has added an additional layer of complexity to the conflict. In March 2021, militants carried out one of their largest terrorist attacks to date in Cabo Delgado, targeting a gas project in the town of Palma, which killed dozens of local and foreign residents and displaced nearly 60,000 people. Isabel Prostamo, the Cabo Delgado Provincial Coordinator for Sexual and Reproductive Health for Muleide, one of Fórum Mulher’s partner organizations, had only recently arrived in the region when the attack on Palma occurred. “Fright took hold of me,” she says, “but I was stronger thinking that many displaced women and children need my help.” Prostamo has seen first hand the problems faced by women in the conflict including “food insecurity, destruction, sexual violence, and physical attacks. 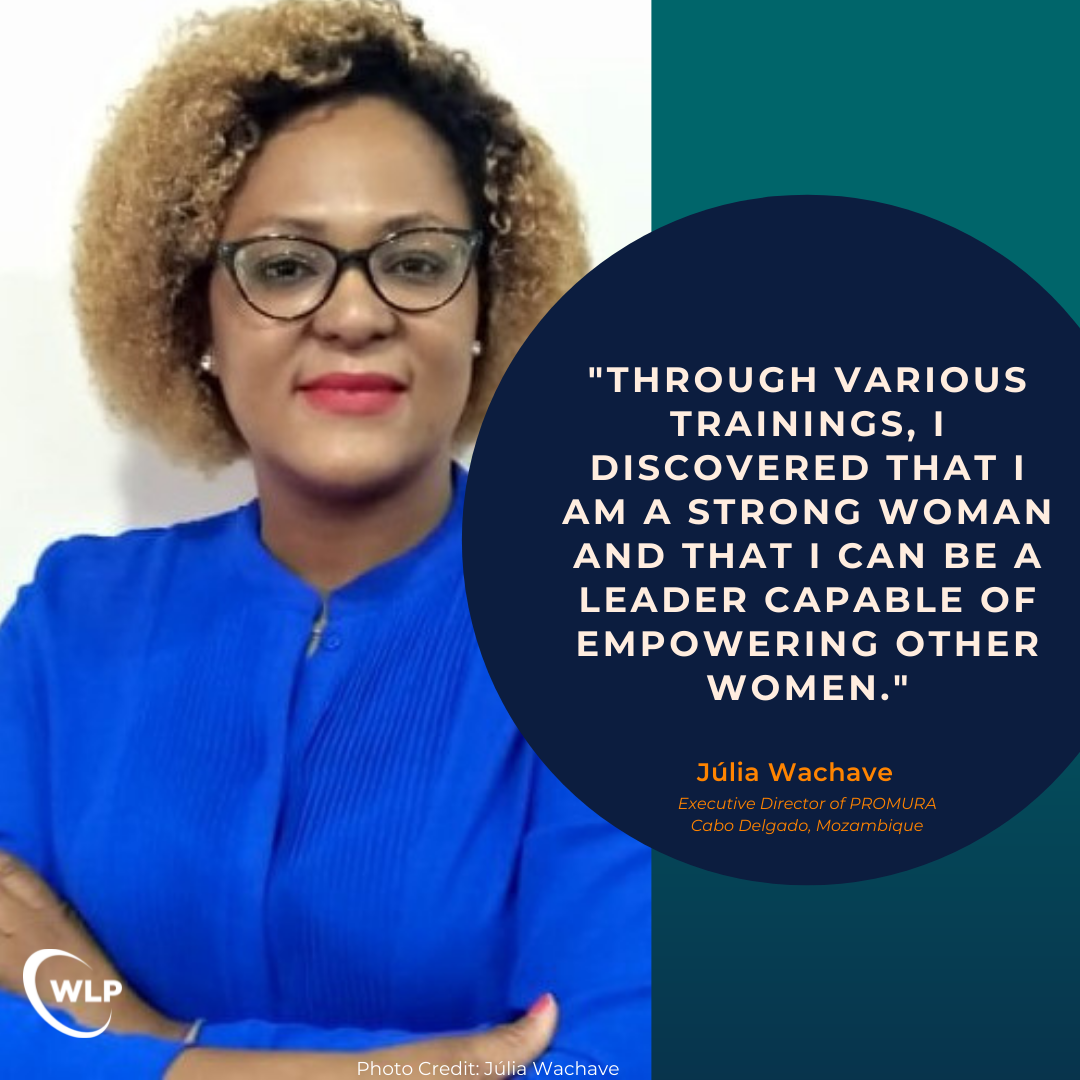 Júlia Wachave attended her first WLP training on political participation at age 25 and has since led nine TOTs as a regional trainer with Fórum Mulher. Currently the Executive Director of the Association for the Protection of Women and Girls (PROMURA) in Cabo Delgado, Wachave has over 17 years of experience as a lawyer, social activist, and human rights defender. She has worked tirelessly since the insurgency began to address the violence against women and girls.

For Wachave, the crisis has been harrowing. “During the emergency, I felt sick because of the fear and fright of the war and for having done a job I had never done, which included attending, receiving, and accommodating victims of violent extremism,” she said in an interview with WLP. She describes working with IDPs from five districts in the Cabo Delgado province (see map) who lost everything. “For me,” she says, “it was a great suffering because we slept traumatized, tired, and with headaches.” 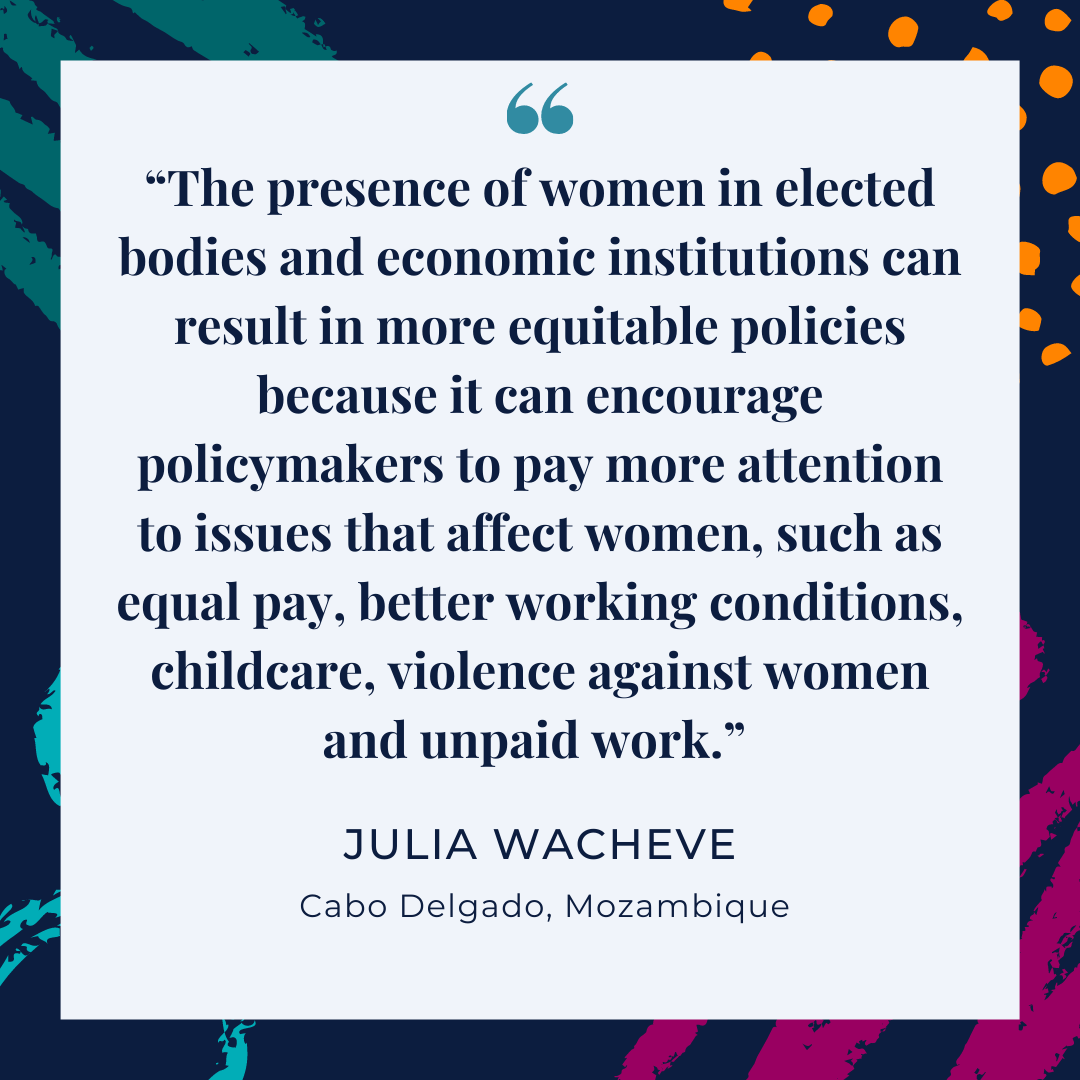 Wachave draws strength from the skills she gained as a participant in the Fórum Mulher’s WLP leadership training program, and solidarity she formed there with other women activists. “I discovered that I am a strong woman and that I can be a leader capable of empowering other women,” Wachave says.  “This is what I have done until today.” Following the TOTs, Wachave began participating in all levels of politics, including village meetings, community forums, consultative councils, and national campaigns. She has bolstered her coordination and management skills and gained access to women’s networks across Mozambique. She now hosts her own leadership training using WLP curriculum with women in Cabo Delgado, where she shares her knowledge with women impacted by violence.

Wachave and the women she trains are disrupting patriarchal decision-making structures. She notes that “the lack of [women’s] voices serves as a critical factor in maintaining gender inequality and poverty, effectively blocking women's access to decision-making and agenda-setting processes, as well as opportunities to lead these processes.” The TOTs in Cabo Delgado expose women to new strategies to increase their political participation. When women participate in politics, they write policies that influence the issues that affect them most, including equal pay, childcare, and criminalizing violence against women. 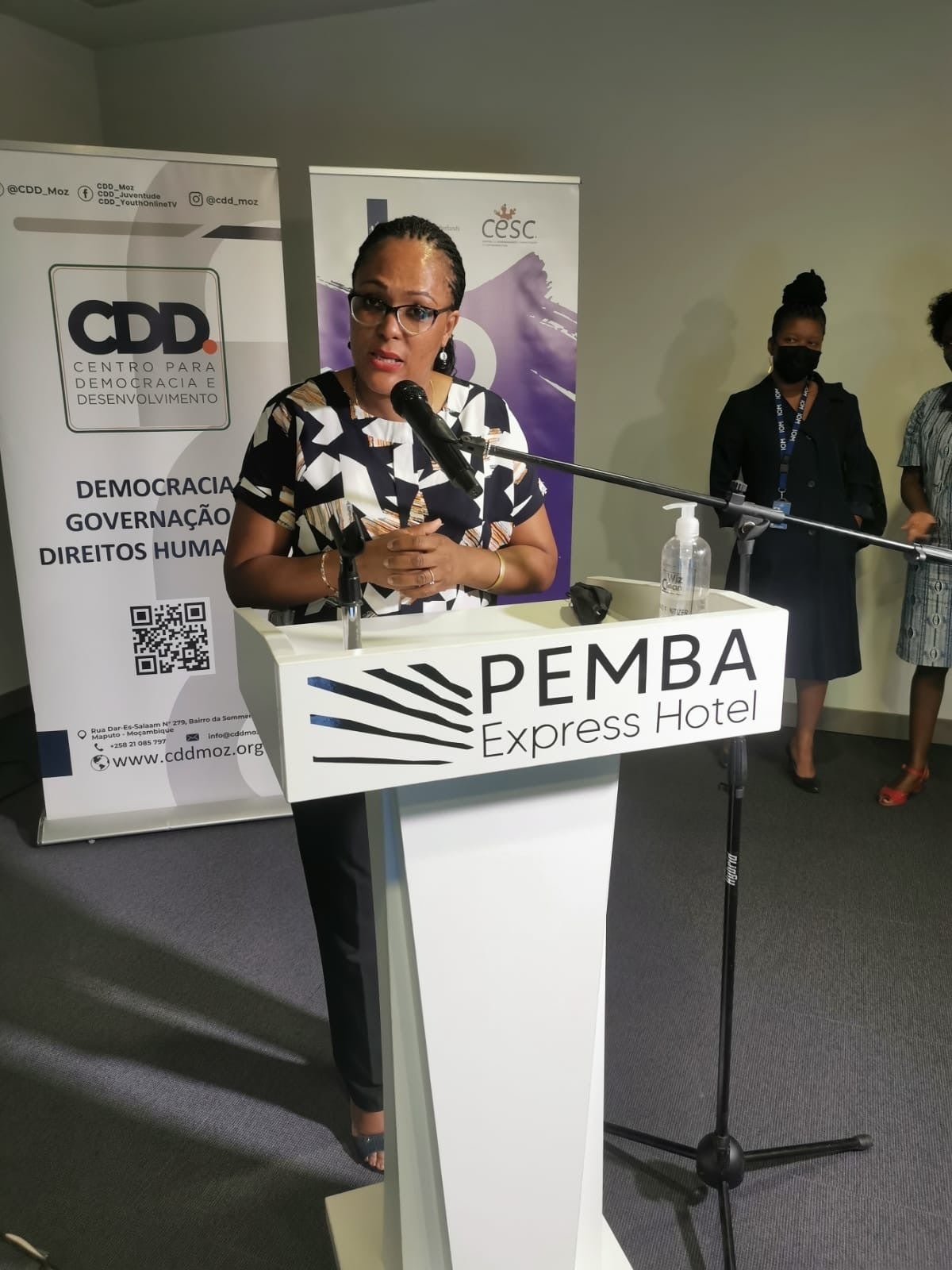 Both Wachave and Prostamo illustrate how Fórum Mulher’s training program has given women a space to build solidarity with one another, begin to heal emotionally from trauma experienced in the conflict, and work collectively to advocate for their rights. “To be an activist in Mozambique can be dangerous,” Wachave told WLP, emphasizing the difficulty of working in violent and unstable conditions. “It is important for women to know they are not alone.”

WLP’s mission is to transform power relations in order to promote peace, equality and justice. Our partners adapt WLP’s curriculum and training programs to fit their local needs. In Mozambique, Fórum Mulher is using WLP’s training model to help local women understand regional and international human rights mechanisms and improve their capacity to advocate at national and global levels. According to Fórum Mulher, regional and international platforms, including the UN and the African Union, play an important role in the defense of human rights, and pressure from international actors can influence what happens on the ground.

Mandlhate, Prostamo, and Wahave are hopeful for the future of Cabo Delgado, which has a rich history, culture, and natural beauty, including, in Mandlhate’s words, “an immeasurable wealth of beaches.” Wachave tells WLP that students like music, soccer, and art, and describes delicious traditional cookies called mandazi. Fórum Mulher believes that with women leading the way, a peaceful and more equitable future is possible.