16 Days of Activism against Gender-Based Violence 2021

This year, WLP’s Partnership-wide digital campaign for the 16 Days of Activism against Gender-Based Violence shares important historical moments in the fight to end GBV and key advocacy successes from across WLP’s partner countries. Follow WLP on Instagram, Facebook, and Twitter to follow the digital campaign. 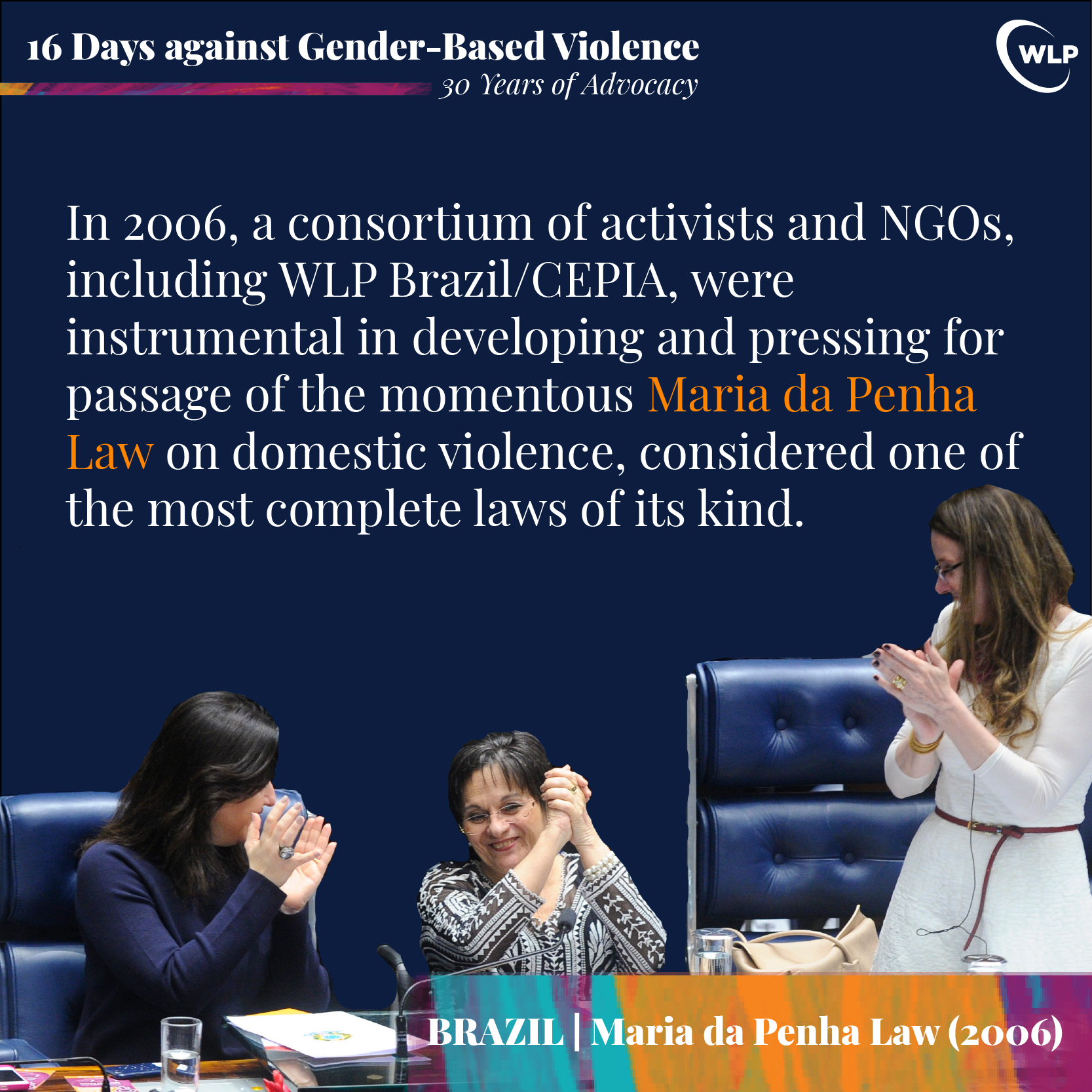 In May of 1983 Maria da Penha Fernandes survived an attempt on her life by her husband. She was unable to divorce her husband after the first murder attempt and returned home weeks later, where her husband attempted to her murder her a second time. Despite ample evidence against de Penha’s husband, it took 19 years for her husband to be incarcerated for the murder attempts. He only served two years of a six-year sentence.

Da Penha’s case caused national outrage in Brazil and raised awareness about the issue of femicide and the lack of support for survivors of domestic violence in the country. Da Penha continued to push for justice and in 2002, the Inter-American Commission on Human Rights “held Brazil responsible for violating the human rights of Maria da Penha, including her right to a fair trial, right to judicial protection, and right to equality before the law.” In 2006, a consortium of activists and NGOs, including WLP Brazil/CEPIA, were instrumental in developing and pressing for passage of the momentous Maria da Penha Law on domestic violence, considered one of the most complete laws of its kind. The law established special courts and stricter sentences for offenders, as well as other prevention and relief measures, such as protective measures for women in situations of violence, greater coordination between police and the justice system, and shelters for women.

According to CEJIL, “As a result of the public policies implemented after the new law, in the 5 years after its adoption the law has assisted more than 3,364,000 women since January of 2006.” 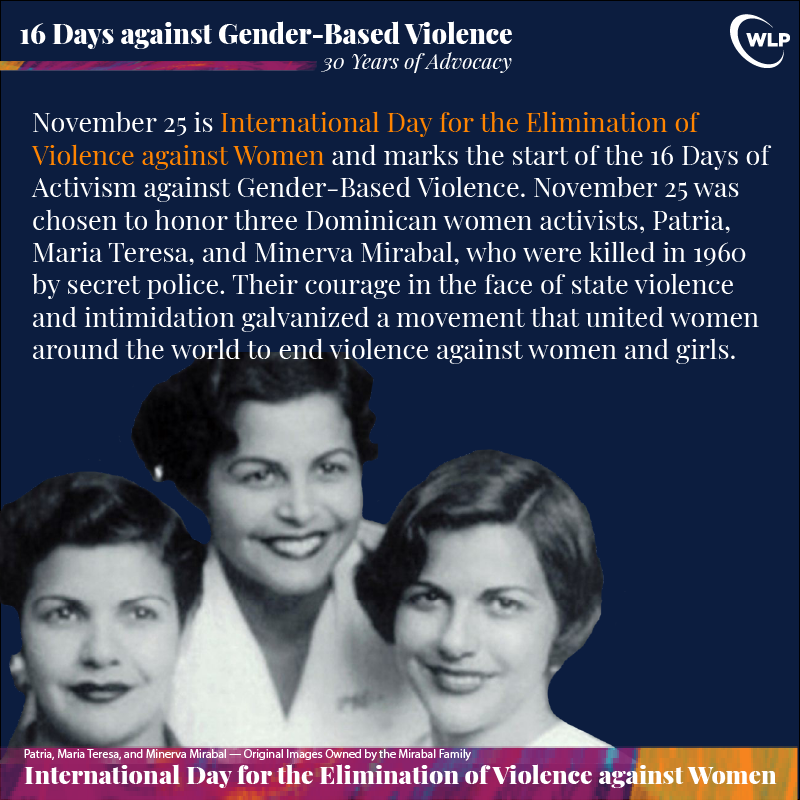 November 25 is International Day for the Elimination of Violence against Women and marks the start of the 16 Days of Activism against Gender-Based Violence. November 25 is significant because on that day in 1960, three Dominican women activists and sisters, Patria, Maria-Teresa, and Minerva Mirabal, were killed by secret police. Their courage in the face of violence and intimidation galvanized a movement that united women around the world to end violence against women and girls.

During the regime of Rafael Trujillo in the Dominican Republic, the Mirabal sisters spoke out against the oppression of civil liberties and the use of systematic violence. While traveling to Puerto Plata, the sisters were ambushed by Trujillo’s secret police and murdered. Their deaths are considered one of the decisive sparks that galvanized the movement against Trujillo’s regime both in the country and internationally.

In the 1970 and 1980s, activists in Latin America began to use the day to call for an end to violence against women and girls more broadly and in 2000, the United Nations officially adopted a resolution to designate November 25 as the International Day for the Elimination of Violence Against Women. In 1991, the 16 Days of Activism against Gender-Based Violence was proposed to run from November 25, International Day for the Elimination of Violence against Women to December 10, International Human Rights Day, to emphasize that women’s right to live free from violence is a human rights issue. According to the official 16 Days Campaign website, “Over 6000+ organizations in approximately 187 countries have participated in the Global 16 Days Campaign since 1991, with a reach of 300 million [people].”

The impact of the Mirabal sisters has lived on in generations of activists around the world. According to History.com, when Minerva Mirabal was asked if she feared for her life because of her activism she responded, “If they kill me, I’ll reach my arms out from the tomb and I’ll be stronger.”