In September 2018, activists from six countries in the Middle East and Africa convened in Beirut for a workshop on women, peace, and security.  The event, which was hosted by WLP’s Lebanese partner organization, the Collective for Research and Training on Development-Action (CRTD-A), created a multinational network of advocates to bring women to peacebuilding.

The 27 participants were from Iraq, Jordan, Libya, Nigeria, Syria, and Turkey; all of them work with refugee or internally displaced populations, and a number of them are refugees themselves. They were selected for their activist credentials and their demonstrated interest in taking on leadership roles in their communities. The four-day workshop allowed the attendees to make connections with women in their region and beyond, sharing knowledge that will help them establish peace and gender equality in their communities. 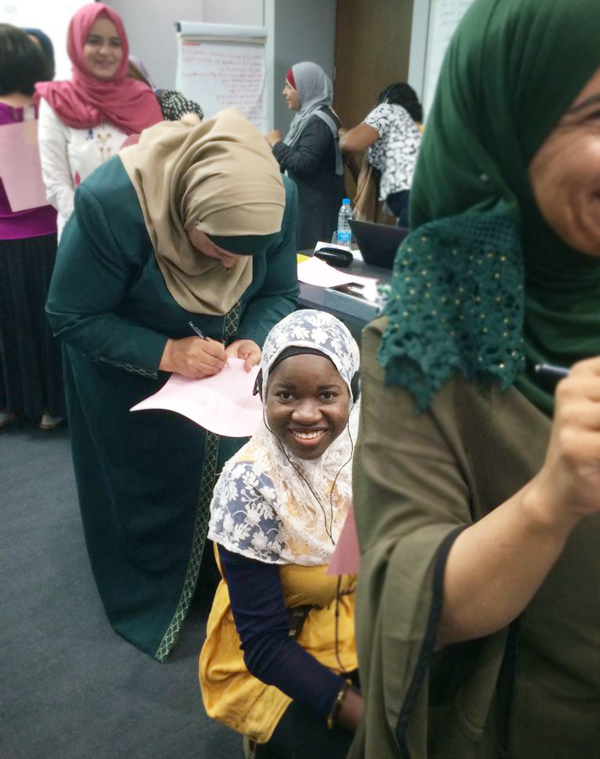 Participants engaged in a number of capacity-building sessions to strengthen their advocacy skills.

A Need for Women’s Leadership

The number of displaced people in the world is at its highest since World War II. Women fleeing their home countries are in especially difficult positions, as they are frequently the victims of discrimination, economic depravation, and violence, but rarely have the power to get justice in their host communities or refugee camps. They are often making important decisions about their families’ education or livelihood, yet they seldom have a voice when it comes to policies that affect them.

Despite these challenges, women are not resigned to the hardships they face in their communities and hope to achieve security for themselves and their families.  After visiting a refugee camp in the Zaatari village in Jordan, Liberian peace activist and Nobel Peace Prize laureate Leymah Gbowee stated that “Refugee women are not passive victims; they are strong and courageous leaders, often the first ones to respond to the needs of their community.”

Equipping refugee women leaders is key to empowering displaced populations and creating peace. A study conducted by the International Peace Institute showed that when women are involved in peace talks, they succeed in finalizing negotiations when momentum has stalled. Including women also appears to make conflict statistically less likely to break out again. But the most important rationale for involving women in policymaking is not their effectiveness as peace builders; rather, it’s that women make up half the world’s population, and they have the right to influence decisions that affect their lives.

Building Peace through Advocacy and Knowledge 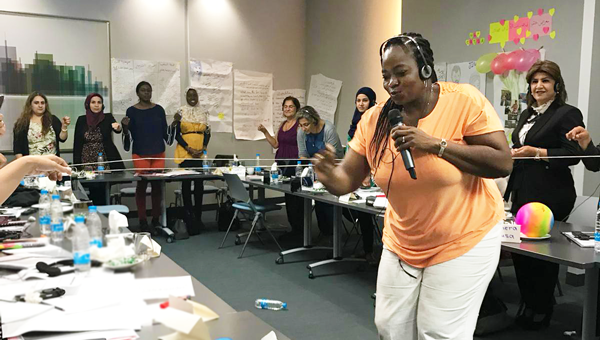 Including women in peace negotiations leads to better outcomes, but they are often excluded from these processes.

WLP senior facilitators oversaw the exchanges and exercises on topics relating to empowerment during the four-day workshop. Participants contributed unique insight from their respective cultures, but they were united in their passion for women’s equality. They began the workshop by collaborating on a list of inalienable human rights, including the right to life, healthcare, security, free decision-making, equality, self-respect, education, and political and economic participation.

At the end of the workshop, participants split into groups to develop projects that will support communities affected by displacement. These step-down initiatives will be implemented in the months following the workshop, and were designed considering the distinct needs of refugee women:

By the end of the workshop, participants had strengthened their advocacy talents and increased their knowledge of human rights, peacebuilding, and ending violence against women. The new skills and connections they acquired will bolster their activism for refugee women’s causes.

During the 16 Days of Activism against GBV 2019,  WLP Malaysia/AWAM conducted activities to raise awareness throughout the country, including a social media campaign, an online petition to advocate against rape, development of informational posters, and organization of a rally to demonstrate support for ending GBV.